I completed another set of prints this week, again trying to lift the rust from a plate but again failing. However, the resulting prints were interesting so it wasn’t all bad – I just need to look at whether I should print from the rusted plates now or use them simply in their own right.

This time, the reverse of the plate was that which was particularly rusted (because it was face up in the ground) and so it was from this side that I decided to try and take the first print. 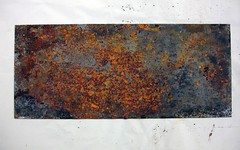 The rust itself was particularly beautiful with some very nice red -almost liquid – rust-drops on its surface. 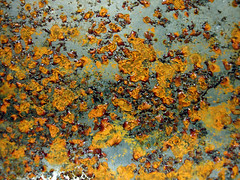 The resulting print however was a little disappointing. Perhaps using a heavier paper might do the trick?

Again I printed the other side which by now is so marked, it’s difficult to remove much of the ink and so the resulting image is extremely dark.

The most interesting results came with a plate I hid in the woods. I left it for a period of a week, and although there didn’t appear to be much on it, aside from a few patches of rust, it was only when it was printed that the extent of wear on the plate’s surface became apparent. 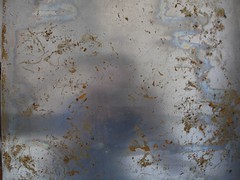 This was the plate I used, and having taken the image I was interested in how I could see my own reflection, for the marking on the plate had reminded me of the surfaces of old mirrors. Seeing the marks revealed in the print led me think how interesting it would be to print some mirrors. Maybe past reflections would be contained on the resulting image…? 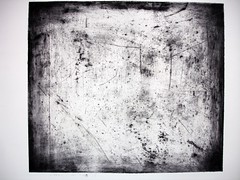 In fact, on the side of which I took the photograph, there is a shadow which could well pass for my image… 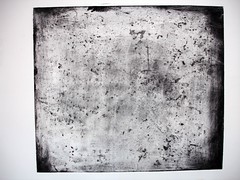