Having completed my first two etchings, I decided to make another larger one, again using my Auschwitz-Birkenau drawings as a basis. The following print is the result.

What I have become interested in, is, as I wrote on my original printmaking entry, the plates themselves, not only as physical objects in their own right, but as metaphors for actions which later one remembers (the memories being the prints taken from the plate). Having buried a plate in the first week and taken a print of the rusted plate this week (which was particularly interesting) I decided to bury the plate from which the above print was taken, and this I did, burying the plate in my garden. 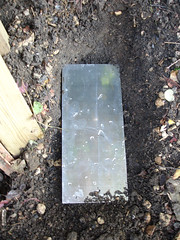 A week later, the plate was dug up again. We’d had some pretty heavy downpours so I was hoping for a good bit of rust. 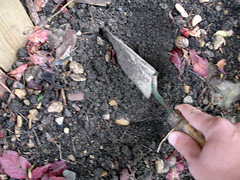 Just the act of using the trowel reminded me of archaeologists gently scraping away the earth to reveal the hidden thing beneath the surface. 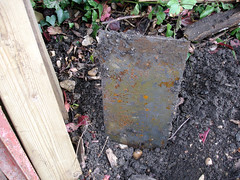 The plate itself was compacted with earth, underneath which was an interesting patina of various rusts.

Tomorrow I shall take a print from this and then re-bury the plate in the garden for another week. I will also start making more plates for burying but not actually printing.