It was – if my ‘facts’ are correct – either my great-grandfather or great-great-grandfather who worked in the Pantygasseg mine in South Wales and having Googled the place, I found the following on Wikipedia:

“Pantygasseg (Pant-y-gaseg) is the name given to a single row of houses on the mountain to the west of Pontypool in Torfaen county borough, South Wales. The name means ‘Hollow in the mare’s back’: mare’s (caseg>gaseg) hollow (pant). This is due to the shape of the mountain as it appears on the horizon.”

What interested me about this description was the meaning of the name, particularly as I’ve recently been working on photographs in which I’ve taken distant people and enlarged them so as to become the principal subjects of new versions of the images. Distance is a theme I wish to explore over the coming weeks and taking the description above, I could at once see its relevance, for the horizon is of course the horizon because its in the distance. Pantygasseg therefore gets its name through its being – in some respects – a part of (or identified with) the distance.

In his book, ‘Phenomenology of Perception’, Merleau-Ponty writes:

“I am the absolute source, my existence does not stem from my antecedents, from my physical and social environment; instead it moves out towards them and sustains them, for I alone bring into being for myself… the tradition which I elect to carry on, or the horizon whose distance from me would be abolished – since that distance is not one of its properties – if I were not there to scan it with my gaze.”

In this extract, Merleau-Ponty observes how a place cannot be distant in terms of its actual, physical properties; it can be big, small, rural, urban etc. but it cannot be distant; distance dependends on the location of the observer; without the observer distance would, as Merleau-Ponty states, be ‘abolished’. The fact that Pantygasseg is so named because of is being a part of the shape of the distance – a hollow in the horizon (shaped like a mare’s back) conjures up the image of an eternal stranger looking at it from far away; someone outside the village, who sees it, knows it well enough to know its name, but is not himself a part. I feel exactly like that stranger. Pantygasseg would have been a well known feature of the landscape of my great-great-great-grandfather’s life and those of his descendents including my grandmother (in her youth) and is therefore both part of my landscape (a landscape from which I have come) and at the same time utterly unknown, a metaphor for all those distant places I know, but of which I am not a part.

Thinking of the shape of the mountain I was reminded of a drawing I made in my diary whilst on holiday in Chania earlier this year. 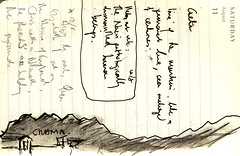 It is a sketch of the mountains which dominate the horizon, and every day, as I looked at them and followed the contours with my eyes, I couldn’t help but think how those who lived in the city thousands of years ago would have seen that same shape, the same jagged line in the distance. There is something timeless about mountains which make one feel every bit the mortal we are. Pantygasseg as a place, at least through its name is a part of that timeless past and a part of my past, a line which my ancestors would have traced with their eyes and one which I realise I must also follow.

Returning again to the quote from Merleau-Ponty; he writes how his existence does not stem from his antecedents, or from his physical and social environment; instead it moves out towards them and sustains them. I was taken by this, as by going to Pantygasseg, I will be moving towards my antecedents, to sustain them in my memory.