I was thinking the other day about the images our memories present to us and what they represent in the real world. I have been interested for a long time in what exactly remembered images are, and having thought about my Tour Stories Project (Oxford Destroyed) I started to think about Oxford as it exists in my memory. If I picture the High Street what do I see, and, if I try and draw that image, what does it look like? I supposed the resulting image would not be unlike a ruin and so I tried it out. 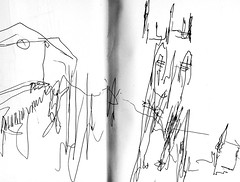 In many ways, the images I drew of what I could see in my memory were like images of the city in ruins, and in many respects, the remembered city is a ruin – it has, after all, in terms of its temporality, passed by.

“…cast the shadow of their own destruction before them, and are designed from the first with an eye to their later existence as ruins.”

I think in some respects this might apply to any structure and their later existence as memories.