Given my interest in memorials, I was interested to read on the BBC News site a story regarding the recently ‘dedicated’ memorial to Armed Services Personnel killed since the second world war. 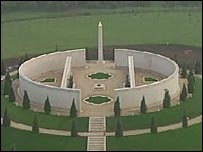 What struck me most was the following line:

“There is room for 15,000 more names to be carved on the Portland stone walls of the memorial, at the National Memorial Arboretum.”

There is indeed something particularly chilling about this fact, for it’s as if the memorial itself is acknowledging the fact that we have learnt nothing from the deaths of those whose names are already inscribed on the walls, that’s it’s as much a memorial to the future as it is to the past; a memorial to those who at this moment are living.