Taking the work I have done so far on the knot installation, and looking at some of the ideas inspired by a set of recent free-drawings on the subject of Auschwitz-Birkenau, I decided to try out an idea I’d put down quickly in my sketchbook on the 20th. 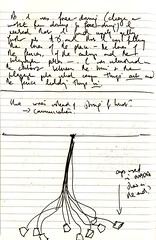 This involved tying a few of the paper cups I’d shown at OVADA to the ends of the strings (which themselves, now dry and somewhat two-toned reminded me even more of wires) to emphasise the idea of these strings being ways to communicate with those who have come before us. The cups act as both a device for listening and a device for hearing and in that sense they are tools for dialogue. There are 50 strings altogether, and so, I initially tried the idea with about a dozen cups. 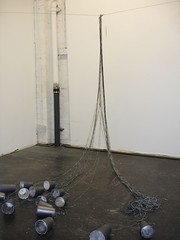 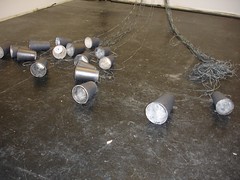 The idea worked well, although one loses a little, the sense of a string being cut, so I will just carry them through as separate works.