Today I took down my installation in St. Sepulchre’s Cemetery, Jericho, which despite the weather (relentless rain) went very well. As with anything like this when work is placed in an unsecured public space, one expects that a few things might go missing, but over the course of two and a half weeks only one label was taken. Two of the label stands had been used by a homeless guy to secure his tent and people I’ve met subsequently assumed that the tent was in fact part of the work. Hardly surprising really, particularly when one considers that a tent or tent-like structure in a cemetery usually denotes an exhumation. In this sense, the tent worked quite nicely with the idea of me bringing the my ancestor – dead for over 150 years – to the surface.

Part of the idea behind the piece was that the story of my great-great-great-grandmother would lead people around the cemetery whereupon they would discover the names of other people buried in the cemetery. As I took the installation down, I noticed a grave on which were listed several names including John and Celia Mayo who died on the same day, February 13th 1884. They were both 19 years of age. What the story is behind their deaths I don’t know, but certainly it’s something I will be exploring in the near future. 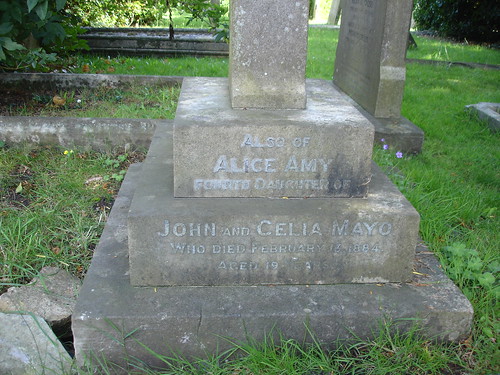