Whilst working on my ‘Dreamcatcher’ project/installation today, I thought again about the idea of it being a piece of music, and, as I thought, a visitor to the studio (Tiffany, who has a very nice voice) decided to try and ‘sing it’, along with Philippa (who first suggested it looked like music). Using the vertical strings as measures and the horizontal strings as indicators of notes on a scale, they sang the entire work, and, although it was a bit of fun, the sound they made did remind me of a kind of lamentation. As I worked on the strings, untangling them and tying knots etc. I felt as if I was playing some kind of instrument – something like a harp. 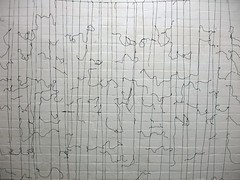 I also thought a lot about the action of weaving, for it’s felt these past two days as if I’ve been creating a piece of clothing, and, given what these cut strings or threads represent, I was reminded of a quote from Roland Barthes’ ‘Camera Lucida’.

“Clothes make a second grave for the loved being.”

A second grave is somehow analogous with the idea of post-memory, for if one sees the clothes of someone who has passed away, one can somehow imagine them without really knowing who they were, just as post-memory allows one to get a feel for a past event without having witnessed the actual moment itself. 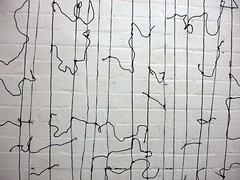