At college yesterday, I noticed how the text I’d written on the windows (see Dark Tourism Conference II) had faded. There was something very poetic about it, the fact the text (the wire) had in the course of time faded, although there were still parts of it remaining. It served to remind me how the past eventually dissolves altogether, how the pain of tragedies in the course of time fades into forgetfulness. 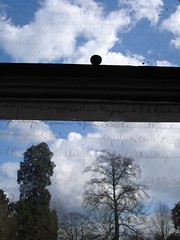 Something else which struck a chord with me regarding this link between text and forgetting, was a quote from Frances Yates’ book, ‘The Art of Memory,’ in which she writes:

“In the Phaedrus; Socrates tells the story of the God Theuth who invented numbers and arithmetic, geometry and astronomy, draughts and dice, and most importantly of all, letters. The king of all Egypt was the God Thamus who told Theuth that the invention of writing was not, as suggested, an elixir of memory and wisdom, but of reminding; the invention will produce forgetfulness.”

It would be interesting to create this project in a place where the text could remain, to slowly fade away in time. One could imagine going over the text as it fades, creating on the glass a kind of palimpsest…