“The open area outside the City Wall bounded by Worcester Street, George Street, Gloucester Street and, to the north, by Beaumont Street. There was probably housing here in mediaeval times. After the Black Death in 1348 it became a derelict and decayed area known as Broken Hayes…”

The following is a detail from a map of Oxford made in 1675 by David Loggan. Carfax can be seen near the top left corner, the castle (now much reduced in size) opposite, and in the bottom right-hand corner, Broken Hayes or Hays – the present day Gloucester Green.

In support of those themes which I’ve outlined in my initial proposal I have started to look at contrasts which exists over a period of time within the same space. As I stated on the homepage of my website:

My visits to Auschwitz-Birkenau and more lately Ieper (Ypres) have served to deepen this interest.

The photo above shows Hill 62 in Ieper (Ypres) as it looked during World War 1. Although not entirely clear, one can make out the sandbags and a soldier looking into the camera. Below is a photo of the same area, Sanctuary Wood, which I visited earlier this month. 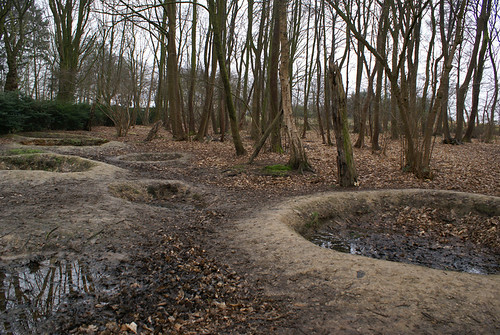 Standing there in the wood, listening to the birds singing, it was hard to imagine what it must have been like to be there as a soldier in the trenches, deafened by shells and with death and destruction everywhere. In Plato’s ‘Theaetetus‘, Socrates assumes there is a block of wax in all our souls, onto which external stimuli are pressed so their shapes are left behind. This block of wax becomes like our memory and I thought of this as I saw the craters left by the shells. The very earth was the world’s own block of wax, it’s memory, into which the horrors of war had been impressed, never to be forgotten.

As with Auschwitz-Birkenau, the silence was somehow a testament to the scale of death suffered there. Here too, in Sanctuary Wood, the silence seemed to speak at length on the matter. Here and throughout Europe, hundreds of thousands of people, millions even, had simply disappeared.

So, here we have two ‘themes’; the contrast between the same place at two different times, and the disappearance (deaths) of unimaginable numbers of people. This takes me back to the start of this entry; to Broken Hayes.

It is estimated that between 1348 and 1350, between one and two thirds of the population of Europe succumbed to the Black Death. Oxford itself lost around a third to a half of its population and the contrast between the town before and after must have been appalling. In many ways, thinking of this difference, I’m reminded of my experience of standing in Auschwitz-Birkenau and the woods of Hill 62. In both these places, it was the silence which spoke of the terrible traumas suffered there, and in Oxford, on Broken Hayes, I’m sure it was silence which spoke of the town’s own tragedy.