History necessitates the consideration of our own non-existence. To imagine the distant past (the past before I was born) is to try and see the world, not only as if I didn’t yet exist, but as if, in all probability, I might never exist at all. With this in mind, the past, re-imagined, becomes a teeming and terrifying space where every object and building, every man, woman and child, every word spoken or written, every intention and gesture, indeed, everything is excited by a vertiginous sense of calamity. Objects in museums, remnants of ancient buildings, old family photographs, all oscillate with this potential, which, although avoided – inasmuch as I’m alive to observe them in the present moment – hold up a mirror to reflect this past forwards, showing me, in the glass, the catastrophe of my future death. As Roland Barthes writes in Camera Lucida:

“I observe with horror an anterior future of which death is the stake.”

Perhaps this is why I find it strange, handling something that existed long before my birth. It’s as if when looking, for example at a mediaeval ceramic pot, or a single shard (as pictured below), that the shape, colour and decoration of that pot, created at a time when I did not exist, were essential aspects of my coming-into-being (I observe with horror how close I came to never existing). And if I can handle the object, then my body feels that horror; it feels, in effect, its own absence. (It’s strange, but the chances of there being humans 100, 200, 500 years from a given point in time is very high – barring any massive disaster. But the chances of any of those individuals being who they are is almost nil.) 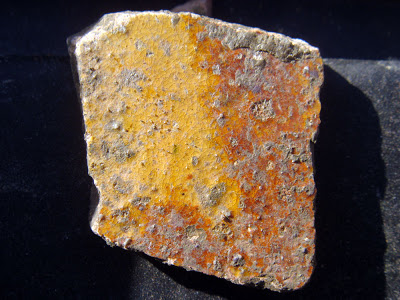 As I wrote in a previous blog regarding old photographs:

“It seems to me that I’m responding to these images kinaesthetically; my mind, memories and experience read them, which is why perhaps I find often these old colour photographs – while amazing – so unsettling. My mind reads them, my body feels them and yet when the image was taken, I did not exist.”

(There is, it seems, something analogous between the distant past as seen in a colour photograph and the colours in the shard of pottery (above). What that is, I don’t yet know…)

Old objects are mirrors, reflecting what Georg Lukács called the ‘not now and not here’ whether that be the past or the future. They have a power and are possessed of a supreme indifference to us the beholder. I’m reminded here of a passage in Max Beerbohm’s Zuleika Dobson:

“Strange that to-night it [Merton College Tower] would still be standing here, in all its sober and solid beauty—still be gazing, over the roofs and chimneys, at the tower of Magdalen, its rightful bride. Through untold centuries of the future it would stand thus, gaze thus. He winced. Oxford walls have a way of belittling us; and the Duke was loth to regard his doom as trivial.”

I know that wince. It’s the same as Barthes’ horrified observation. In the past the chances of me (and indeed everyone) ever existing were infinitesimally small. Now that I do exist, I wince because I know that death is certain.

In his book ‘Other People’s Countries’, Patrick McGuinness writes:

“Of course, when you try to imagine yourself somewhere you don’t know and have never been, you can’t do it — your mind slides off the surface of the images you conjure up like a finger on wet glass; can’t get any sort of purchase. It’s much easier to imagine the inverse: the place you know well without you. It hurts more that way around too, especially if you imagine the place you know without you while you’re still there — you darken the edges of your own vision, put a black border around your days and they become like leaves curling inwards, dying from the outside in. Even as you live them forwards, you’re looking at them from behind, seeing them as they would be if they were over. I spent most of my childhood with a foretaste of its pastness in my mouth.”