Without wishing to reduce the Venice Biennale down to the level of the Eurovision Song Contest (difficult as that is when walking around the Pavilions of the Giardini) my winners as regards the participating countries are, in no particular order, Hungary, Poland, Mexico, Estonia, Portugal and Luxembourg. Out of these Hungary and Poland exhibited at the Giardini while the others showed in various locations throughout the city. An awful lot in the Biennale’s other main venue, the Arsenale, was instantly forgettable (or mind-numbingly unforgettable as in the case of the United Arab Emirates). But of course there were exceptions: Lygia Pape, Ceal Floyer, Bernar Venet and Miranda July (who, in the gardens, injected some much needed humour) were all interesting. But then, across the water, in a series of new exhibition spaces, came Jan Fabre of whom the less said the better. At least the architecture was interesting. Venet’s massive sculptures worked well within the great brick voids and I must also mention AES+F’s The Feast of Trimalchio which was both weird and weirdly compelling, like a rather kitsch song one can’t help sing along with. 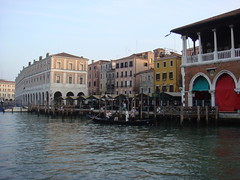 In terms of individual participants showing at the Biennale, I was taken with quite a number of works including Nathalie Djurberg’s disturbing video/sculpture installation described in the catalogue as a surrealistic Garden of Eden, Hans-Peter Feldmann’s beautiful Schattenspiel (Shadow Play), Simon Starling’s Willhelm Noack oHG and Chu Yun’s Constellation. There were numerous others too, including, perhaps most notably Mona Hatoum who showed at a so-called ‘collateral event’ in the Querini Stampalia. 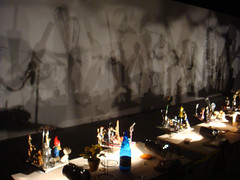 But just as there are a small number of winners so there’s an inverse number of losers – crap to you and me. The winner of the wooden spoon however has to be Switzerland’s entry (I’m fighting against the desire to write Bang-a-Bang-a-Bang or such like silly song title and have in a sense already failed). The work explained – or rather the blurb did – that ‘drawing is a movement of sight, of the nuanced shifts and deviations that attract undirected attention to objects and dream figments that are never really concretized’ and from that codswallop you might agree the curators or whosoever wrote the guff for each piece should also claim a piece of the booby-prize. Other notable rubbish included Australia (who were also rubbish two years ago) and Germany (who were my wooden spoon winners at the last Biennale and who for this year’s effort drew on the talents of British Artist Liam Gillick (?) who managed to make a trip to IKEA look interesting – by the way I read that Gillick travelled for more than a year, ‘researching and developing his project for the German pavilion in a continuous dialogue with curator Nicolaus Schafhausen’ – quite how he arrived at making some dull cupboards escapes me). Israel’s entry was terrible and Norway’s too (definitely nil point). There were other notable wastes of space but I can’t be bothered to waste any space upon them.

One of the biggest disappointments for me however was the British entry from Steve McQueen, whose film Giardini was, well, boring. Certainly it contained some beautiful shots and was an interesting idea, but at 30 minutes it was just too long. There was also the fact that one had to view it at a certain time, that viewers were asked to arrive 10 minutes before the show which built up expectations to such a level the film almost had to fail. After a few minutes we were already shuffling in our seats, a few more minutes – when the dogs came again and sniffed around in a manner straight from a Peter Greenway film (no slight on that director intended) – and we were checking our watches. As a piece one could view at leisure, walking in and out at whatever time suited, it probably would have worked, but treating it like a film turned it I’m afraid into a very dull affair. As I don’t have any pictures of these less-than-inspiring works here is a picture of very-inspiring Venice. 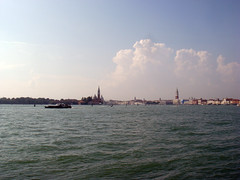 What I really loathe are those pieces where the artist assembles tons of stuff in a room or space with which the viewer is asked to ‘create a narrative’ or not as the case may be. There are a few exceptions where this type of work is successful, but by and large it irritates the hell out of me. So Haegue Yang and Pascale Marthine Tayou, pack it in now.

But what about the winners..?

For me, Peter Forgacs’ Col Tempo was exceptional, giving history a human face. Taking archive footage from the Wastl project, he showed how people in the past, who lived in times of trauma were just like people today. It sounds a pretty obvious thing to say but often when we think about the past we tend not to see individuals as such, but rather numbers and tropes. Ironically, the footage Forgacs used was originally concerned with anything but the individual, rather Dr Josef Wastl, head of the Department of Anthropology at the Museum of Natural History in Vienna, put on an exhibition which attempted to present to the public ‘the characteristic physical features’ and ‘mental traits’ of the Jews. What we see when looking at the images however are individuals just like us today. 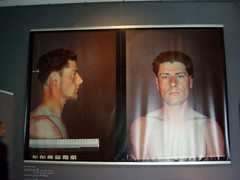 Poland’s Krzysztof Wodiczko examined the issue of immigration. The Guests of the title were shown as shadow-figures outside the space in which we as onlookers (or out-lookers) were standing. We saw them without faces, without distinguishable characteristics, save for their voices which accompanied the work  Nevertheless, in their outlines we could recognise the people we see all around us, the way they move, the way they stand and taken together with Forgacs’ work, it was indeed a powerful piece (by the way Poland won it for me two years ago). 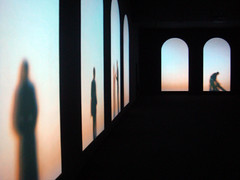 Another powerful pieces came via Teresa Margolles who showed her work in the Mexican ‘Pavilion’. Her installation (and action) What Else Could We Talk About? took the country’s endemic violence and brought it into the Palazzo Rota-Ivancich. The Palazzo is a decaying structure which is nonetheless quite beautiful. The original (or at least very old) decor is still visible – faded wallpaper with patches where paintings (perhaps portraits given their shape) once hung. It was almost enough just to be in the building. Each room contained an incongruous mop and plastic bucket in which we learned blood collected from sites of killings in Mexico was mixed with water and used to wash down floors over which we were walking. In every room therefore one could sense quite palpably the echoes of missing people – those who’d lived and died in the city over the course of the Palazzo’s existence and those who lived and died in the present albeit thousands of miles away. There was a sense of the past and distance in the present being synonymous. There were also paintings again made from blood collected at the sites of executions in Mexico. Each painting, hanging like a blanket, resembled a modern-day Turin Shroud and I found myself being asked to believe, not in a life that could be known only through death, but individual deaths (and many of them) happening in the midst of life today. 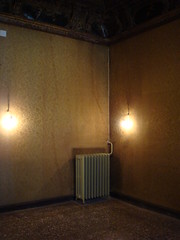 Estonia’s entry examined in part the power of symbols and in particular the replica of a statue which had once stood in the capital Talinn. The statue (the replica of which looked quite kitsch in the gallery) marked the grave of Red Army soldiers from 1947 until its removal in a post-communist Estonia. For most Estonians the statue was a symbol of Soviet oppression, for many ethnic Russians it symbolised victory over Nazism. The artist, Kristina Norman placed the replica where the original statue had stood and documented the furore that followed with the police taking both her and the statue away. 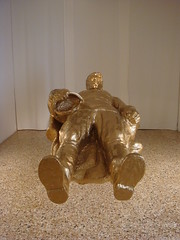 The Portuguese artists Joao Maria Gusmao and Pedro Paivia showed a series of video projections in a piece entitled Experiments and Observations on Different Kinds of Air. Each piece appeared to have been shot with a high speed camera, revealing in slow motion clear details of fire, water etc. But the appearance of each projection was that of a 1970s snapshot. The texture and quality of the projections reminded me of my own holiday photographs and in particular some work I’ve been doing on their hidden details.

And finally Luxembourg. Another video installation tucked away in a backstreet in which the artists Gast Bouschet and Nadine Hilbert reflected on the divide between Africa and Europe, evoking according to the catalogue issues of difference and immigration. What I liked about the piece was the dialogue created between the various projections as seen through open doorways between the rooms. The image of a fly struggling in a spider’s web and that of a man standing still in a street but clearly lost in an alien world was particularly striking – one could sense via the other image his internal struggle. 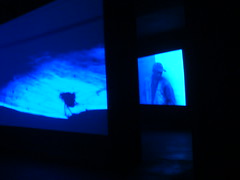 All in all the Biennale served up the usual mix of both the sublime and the ridiculous. Much of it – especially in the Arsenale (now a much bigger site) was pretty lame, but then any work would struggle in such a massive space, vying for attention like an antique thimble in a flea-market. Certainly the use of spaces outside the sites of the Giardini and Arsenale tended to make for more interesting work, but one could argue that when in a place like Venice every space and every part of every space is interesting, whether home to art or not.