Every Sunday, from when I was born to the age of 16, I went to church. It was in many respects – and still is, even though I no longer attend – the hub of family life, having played a central part in the life of my extended family from the moment my mum moved to Oxford with her family in 1952. I was christened there in 1971; my mum and dad were married there, as were my aunts and uncles and several cousins. Many members of my family met their partners in the Youth Club and of course we have said goodbye to family members; my Grandad in 1984, my Nan in 2010 and step-father in 2008.

I doubt there is any place in the world that harbours so many memories for me, but the one I want to recall today isn’t a specific memory as such but rather a recollection. I recall how as a young boy, I used – when singing hymns – to look at the dates of birth and death of the authors, in particular John Wesley. It’s hard to say what I thought while looking at his dates (1703-1791); I can, as an adult, only interpret what that child was thinking. (Thinking about this now, it could be that it was Charles Wesley’s hymns we sang, in which case the dates would be (1707-1788). It could of course have been both). I remember too a plaque on the wall, dedicated to the memory of a man killed in the Second World War. Again there was something about the dates that captivated me – a date from a time – and a place – before I was born.

The dates of someone’s birth and death delineate a space, much as a boundary on a map, a place that existed but doesn’t anymore. They are coordinates for the beginning and end of a journey. 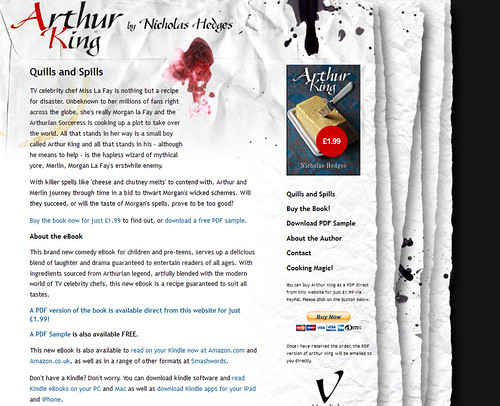 Buy the ebook directly from the website (in PDF) format for just £1.99. Visit www.arthurking.org for more details.
TV celebrity chef Miss La Fay is nothing but a recipe for disaster. Unbeknown to her millions of fans right across the globe, she’s really Morgan la Fay and the Arthurian Sorceress is cooking up a plot to take over the world. All that stands in her way is a small boy called Arthur King and all that stands in his – although he means to help – is the hapless wizard of mythical yore, Merlin, Morgan La Fay’s erstwhile enemy.

With killer spells like ‘cheese and chutney melts’ to contend with, Arthur and Merlin journey through time in a bid to thwart Morgan’s wicked schemes. Will they succeed, or will the taste of Morgan’s spells, prove to be too good?

This brand new comedy eBook for children and pre-teens, serves up a delicious blend of laughter and drama guaranteed to entertain readers of all ages. With ingredients sourced from Arthurian legend, artfully blended with the modern world of TV celebrity chefs, this new eBook is a recipe guaranteed to suit all tastes.

As well as the kindle platform, you can now read Arthur King in a wide range of other formats (including PDF) at Smashwords. The first 10% of the book is available as a sample so you can try before you buy.

I’ve also created a website for the book  (www.arthurking.org). A temporary page is available with the full Arthur King experience coming soon!

Well, I thought I’d give it a go and now my children’s novel, Arthur King is available on Kindle, a story in which Arthurian Legend meets with the modern phenomenon of the TV Celebrity Chef.

Miss La Fay was once the richest, most powerful, most successful TV celebrity chef in the world. But then, I’m sure you already know that… don’t you? No? Are you sure? You must remember…

She was tall, beautiful, with long dark hair and a voice like chocolate sauce. She was on TV seven days a week, fifty-two weeks of the year and commanded an audience of millions right across the globe. From Great Britain to China, the U.S.A. to India, everyone knew her name. Cable, Satellite and MissLaFay.com – there was no escaping her recipes.

Other celebrity chefs around at the time met with strange and unexplained accidents, most notorious among them Colin ‘Big Mc’ McKee, found in the world’s biggest haggis, cooked for a Charity Dinner. You don’t remember him? You don’t remember the haggis?

What about Guy Blancmange, the Michelin chef with the Michelin stars, now flipping burgers in a motorway service station? Or perhaps Arnaud de Foisgras, found fattened up in a pigsty on a farm in Northern France? You don’t remember any of them? Well, that isn’t surprising and to be honest, I know you won’t remember Miss La Fay at all. It’s only to be expected, and this story is the reason why you have forgotten her. You and everyone else in the world.

But it could have been so very , very different, if not for the bravery of a boy called Arthur King. 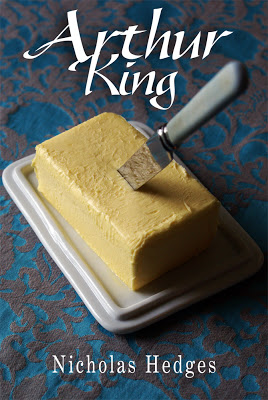