With my latest set of tokens (for ‘Missded’ 4) I wanted to work with a few of them and try something new. As I’ve stated before, the tokens – the originals on which they’re based at the Foundling Museum – represent an individual given up; an individual made absent. They were the means by which the mother could claim her child back if she were once again able to look after him or her. Now, more than two hundred years later, they are the only means by which we can ‘know’ those children. Like everything that comes down to us from the past, much is anonymous and fragmentary.

For the purposes of my ‘Missded’ project, they represent my having my children to stay for a time before they return to their mum. In particular, they represent their absence in the days when I don’t see them. The patterns from which they’re cut, were drawings made by me and my son which were traced, cut and stitched together, representing the idea of a memory cherished and replayed, over and over. The drawings were made in an instant, but the process of making the stitched versions (the memory) took weeks and months.

Every object in a museum, every relic (whether an object or building, or part of a building) is surrounded by space; that time and space from which they are now estranged. The fabric tokens in the Foundling Museum are likewise surrounded by space, into which the patterns seem to seep.

With one of the tokens I made for ‘Missded’ 4, I wanted to somehow show that space – that absence, the ‘missingness’ as it were and so I thought of placing them within another canvas. The result can be seen below. 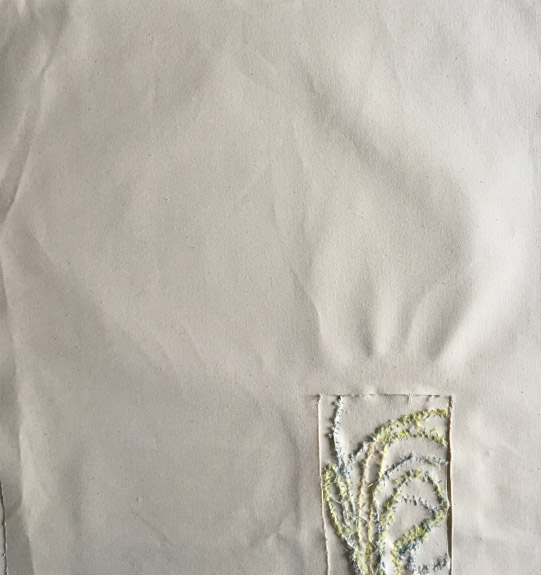 The thing which struck me with this was how the stitched lines of the token seemed to want to encroach on the space above and to the sides, reminding me how, when looking at objects in museums, one tries to push the boundaries of the object on display into the space that can’t be seen; the space of the distant past. It is, as I’ve said above, like the patterns seeping out from the fabric tokens. This token resembles the stems of a plant, which I think helped in that idea of growing out and beyond the limits of its own space.

So, although I like this image, it demands something else. The question is, how is that to be realised?