Appropriately for the work I’ve been doing on Oxford Destroyed (itself, part of my Tour Stories project), I chanced again upon a map of the lost streets of Oxford. I first found it a year or so ago, and it was only in conversation today that I remembered it; strange how things acquire relevance at a much later date. The map shows a number of streets and lanes lost to the city by the 17th century; among them Exeter Lane, Schools Street, Frideswide Lane and Jury Lane (the rather unfortunate Shitbarn Lane was also amongst their number). Looking at the map, I couldn’t help think of the ‘map’ I’ve recently ‘made’ as part of the the Oxford Destroyed project; the aerial view of the fictional ruined city. 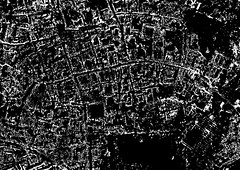 Thinking about the ruined cityscape, I imagined as I ‘walked the ruins’, how the layout of the streets would perhaps change as new routes were cut through the rubble of buildings, and, looking at the map of the lost streets of Oxford along with those which are still in existence, one can see how these changes are in fact all part of the natural evolution of the city.
In my introdction to Tour Stories I wrote:

As old as it is, Oxford is like every city, one which constantly changes. People come and go, passing through its streets as daytrippers; others live a lifetime here and never leave. Generations come and go, stones corrode; whole buildings are lost to progress. Every day the city is in some small way renewed, restored, destroyed and rebuilt. And with every building that is lost, with the death of every one who has ever known it, so the city changes.

The one thing that has changed little over the centuries is the layout of the streets. Buildings as I said above are lost to progress; generations come and go. One of the things that defines Oxford as being what it is is this ancient layout of streets and lanes down which people have walked for hundreds of years. But nevertheless as the map has shown, even these streets can be removed. High Street, Queen Street, St. Aldates and Cornmarket Street might well have stayed more or less intact (albeit the last three with different names) but those such as I listed above have succumbed.

The idea of streets lost to time beneath various buildings is to me as enigmantic as the lost names of John Gwynn’s survey (1772), a document I have been using on another project; 6 Yards 0 Feet 6 Inches and just as I am exploring this survey through a piece of sonic art/composition, so I want to explore these missing thoroughfares. The spaces still exist of course; Jury Lane has been swallowed up by Christ Church, Exeter Lane by the Bodleian Library, Schools Street by Radcliffe Square (part of it is still extant and is now known as St. Mary’s passage) and Frideswide Lane also by Christ Church.

The lost streets also interest me in relation to other projects; for example, the route between the two sites for my Mine the Mountain exhibition in Autumn (the Town Hall Gallery and the Botanic Gardens) are connected by Deadman’s Walk, the route taken along the old city wall by Jewish mourners in the 13th century. It seems to me that some of that route was along what its shown on the map as being Frideswide Lane, but what interests me in particular is Jury Lane off what is now St. Aldates. In the Victoria County History for Oxfordshire, it states :

Little Jewry corresponds with Great Jewry, the old name for St. Aldates which was, after Great Jewry, known as Fish Street. It was the mediaeval Jewish Quarter and the missing street strikes a chord with the theme I have been exploring for the past eighteen months or so; the missing of the Holocaust.

This theme of missing people has lately found form in another project – Umbilical Light and seeing the faces in this work, it is interesting to see how all these works are becoming intertwined.