In the Oxford Journal reports into the murder of Elizabeth Noon by her husband Elijah, it’s stated that:

“He had been drinking at the North Star public House, in St. Giles’s, on Saturday night; that house is kept by the daughter of her [Elizabeth Noon, daughter of Elizabeth and Elijah] uncle Mr Thomas Noon, who paid his men there, and where her father, who worked for him, received his wages which were 20s.”

Like dozens of pubs, the North Star public house has long since vanished and is one which I have never heard of. However, on researching the pub in the library today I discovered the following information:

“North Star public house, 3 Broad Street. Very few records of this pub, but seems to have been mainly licenced by women; Isabella Gittins in 1832 and Mrs. Marsh in 1871. Not known when it closed, but the premises could have been the house of W.B. Yeats the poet while he lived in Oxford. The whole of the site was demolished in 19828 and became Boswell’s department store [which it still is].” 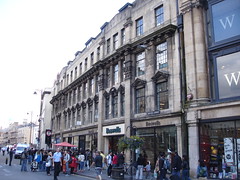 On another site, Headington.org the following information about the North Star is given:

Among the building which had to be demolished to make way for the present Boswell’s was… the eighteenth-century North Star pub. At the time of the 1851 census the North Star pub was occupied by John White and his wife and four young children, while in 1881 the publican was a widow, Mrs Eliza Smith, who lived there with her two sons.

According to the newspaper, the pub was, in 1852, run by the daughter of Thomas Noon, brother of Elijah Noon. It is interesting however, that the surname ‘White’ is the maiden name of Elizabeth (Charlotte). To understand the report I decided to take a look at the census for 1851.

Indeed, John White was the publican so one can only surmise that between the date of the census being taken and the date of the murder, the tenancy was taken over by Thomas Noon’s daughter, the cousin of Elizabeth Noon (daughter). Looking again at my family tree however, I could see clearly that the Thomas Noon I had down as being Elijah’s brother would be too young to have a daughter running a pub at that time. Therefore I could again surmise that I had made a mistake and that Thomas Noon must be older (it made sense too given that Elijah worked for him).

Searching the records again, I found a Thomas Noon, born in Burton Dassett in 1796 and living in Oxford in 1851. I knew this was Elijah Noon’s older brother. Looking at the census details I could see also that he was a builder and was married to to a woman called Ann who was born around the same time. They both lived in Little Clarendon Street.

As far as things stand, I haven’t found the name of their daughter, or any of their children for that matter, but it’s interesting how I’m using Ancestry not only to find people to whom I am directly related, but to track and place people in a particular moment in time – an event, which in this case happens to be a murder.