Everyday, on my way to catch the bus after work, I pass by this grave at the edge of the path which cuts through St Giles churchyard. 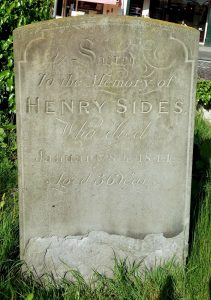 Sacred to the Memory of
HENRY SIDES
Who died
January 8th 1844
Aged 36 Years
For months I’ve silently acknowledged the name as I’ve made my way home, wondering as I wait to cross the road who Henry Sides was. As I make my way to the bus up St. Giles I start to think about other things, and Henry Sides once again slips back to rest in peace and obscurity.
Recently however, I decided to see if I could find anymore about him. I know that he was born around 1808 and so searched for him on Ancestry. Here I discovered a Henry Sides, carepenter, born around 1811 who lived in Clarendon Street with his wife Ann (a dressmaker) and three children, Harriott (sic) (7), Henry (3) and a child ‘not named’ who was only a day old. 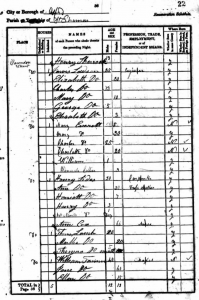 I decided too, to have a look in Jackson’s Oxford Journal where I discovered the following news from December 17, 1831: 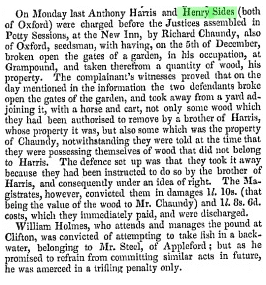 It’s not certain of course that these are all the same Henry Sides, but given the dates and the fact he was the only Henry Sides I found, it seems quite likely.
So from complete obscurity residing in a name carved on a gravestone, we can build at least a little picture of the man who died at 36. The sad thing is of course, that he left behind a young family. Harriet would have been 10, Henry 6 and his other child, who in the 1851 census is named as Emily, would have been 3.
So what happened to his family after he died?
In 1851, they are all listed as living in Summertown. Ann 43, Harriet 17, Henry 13 and Emily 9.

In 1861, Henry J Sides, now 23 is living in North Parade and working as an assistant librarian. His mother Ann (53 and described as an Annuitant) is living with him, as are his siblings Harriet and Emily. Emily, now 20, is recorded as being a Governess.
Ten years on in 1871 and Henry J Sides is married to another Harriet and has a large family of his own, looked after by two servants. He is still an assistant Librarian in what we can now see was the Bodleian.

Ten years on, in 1881, Henry and Harriet have extended their family still further, with the arrivals of Arthur, Herbert, Gertrude and Archibald. They had moved too, living now in Bradmore Road with a Cook and a Nursemaid. At 42, Henry is still an assistant librarian and partner in a firm of rope makers. 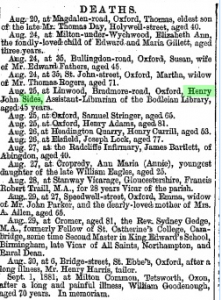 But what of his mother Ann?