Elijah was the son of Elijah and Charlotte Noon whose tragic story I have already written about in ‘A Murder in Jericho‘. With Elijah Jr, tragedy it seems was waiting to strike the family again, for on 26th May 1885, at the Grapes Inn on George Street Oxford (which still stands today), he choked to death.
At an inquest held before the city coroner E. L. Hussey Esq. William Timms, a relative of Noon’s and the Landlord of the Inn gave evidence. The following is taken from the report in Jackson’s Oxford Journal, printed on May 30th 1885.

“On Wednesday at the Grapes Inn, George Street, on the body of Elijah Noon who died suddenly at that house on Tuesday – J Childs, landlord of the Inn, said he knew the deceased. He thought he was about 46 years of age. On Tuesday morning a little after ten, a man named Timms and his wife, relations of Noon, came in accompanied by the deceased. He heard Timms say he was going to Birmingham. He did not see Noon eat anything, but he had some beer which Timms gave him. The next thing he saw was the deceased gasping for breath. Timms caught him and thinking he was choking, patted him on the back, at the same time telling him to put his finger down his mouth. Noon soon after died, getting a little black in the face. He did not vomit. He sent for a doctor, but he came too late to be of any assistance – William Timms of Birmingham, a relative of the deceased, said that on the day in question they walked from Summertown with his (witness’s) wife. Deceased bought some pigs chitterlings at a shop in George Street which he eat [sic] going along. They all went into the Grapes Inn and had some beer. Noon began eating, and all at once he saw him turn black in the face. He patted him on the back but all the deceased did was to beat his chest, He managed to drink a little beer and then fell back dead into his arms. He had known him some years, and had not heard he was short of breath. A Juryman mentioned that the deceased was a well-known whistler which, he thought, showed he was in good health. Verdict ‘Death from Accidental Choking’.

Below is a contemporary (c.1900) photograph of the Grapes Inn. Of all the victorian facades, this is the only one left standing today. 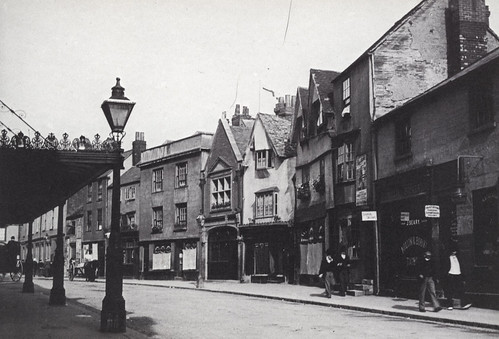