Whilst researching Jackson’s Oxford Journal, I randomly selected an edition from 1842 in which I found the following: 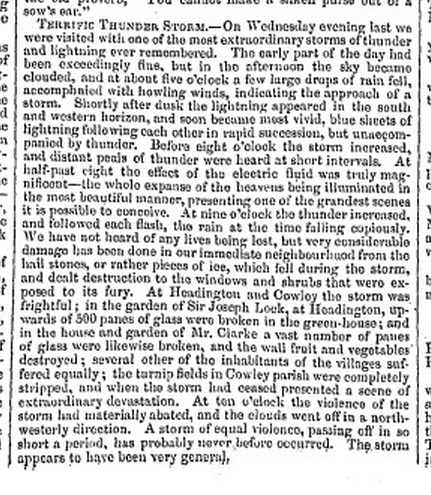 Following on from my last blog and my interest in the perception of time in the past as time passing I’m drawn to this piece which serves, I think, to illustrate the point.

For example, the first line:

“On Wednesday evening last we were visited with one of the most extraordinary storms of thunder and lightning ever remembered.”

Firstly, the words “Wednesday evening last,” pinpoints the storm in terms that are not ‘historical’. It’s not as if we’ve read in a book, “on September 7th 1842, a great storm hit the city.” Rather the event is located in time using a phrase we might use today. It locates the storm in relation to the present – even if that present is September 10th 1842 – and at once feels fresh and contemporary.

Secondly, the phrase “ever remembered,” reminds us, if you pardon the truism, that there was a time before this time. But whereas we know that before 1842 there was 1841 and so on, what this phrase describes is living memory. Again, if we were reading about the storm in terms of its being an historical one, we would know that everyone who experienced it was dead. Reading this article, they are very much alive. Not only that, but the whole of the nineteenth century – and perhaps a part of the eighteen is alive within them too.

It isn’t only this storm which lives within these words, but many others stretching back as far as the late 1700s.

The next description is something with which we have all experienced:

“Shortly after dusk, the lightning appeared in the south and western horizon, and soon became most vivid, blue sheets of lightning following each other in rapid succession, but unaccompanied by thunder.”

That lack of thunder is the punctum of this text. (Ironically, the last time I mentioned punctum in a blog was in an entry entitled ‘Silence‘ about the death of my great-great-uncle, Jonah Rogers.) All the sounds of Victorian Oxford, on that September night in 1842 are contained in that silence. Even within our imaginations, it would seem that the the absence of one sense, heightens all the others. We can sense the approaching storm, feel its presence on the horizon. We can see the muted colours of dusk, muted further still.

Then the thunder comes – “distant peals of thunder” as the writer puts it – which increase until by 9 o’clock, it accompanies every flash. This means of course that the storm was right above the city. The rain falls hard, and with it hail – or “pieces of ice,” which damage numerous properties and the turnip fields of Cowley. By 10 o’clock it was over.

One of the names mentioned in the piece is Sir Joseph Lock whose greenhouse was damaged to the tune of 500 panes of glass. An unpopular man, he built Bury Knowle House in 1800 (the gardens of which feature in another recent blog). Here in Headington, as it was in Cowley, the storm “was frightful” and we can imagine Mr Lock looking out the window of his house as the storm lashed his garden, his face, in the dark midsts of the past, illuminated for a moment by the lightning.