Yesterday I visited my paternal Grandmother and over a period of about three hours, talked with her about her childhood in South Wales and her early years in Oxford. All too often these days we don’t allow the old to speak; too often we try to speak for them, to tell them what they know (what we think they know) talking as if they are foreign and speaking at them slowly and loudly, as if that will help them ‘understand.’ I was keen with my Grandmother (Nana) to get her to just talk, and for her to make connections without my trying to prompt or ask too many questions.

As we get older, our brains lose connections, but sometimes things that may seem forgotten simply require a different map, another means of finding them, the longer way round – a longer path. Talking through events, one often stumbles upon something that leads somewhere else, a new route is found and that which was lost is rediscovered. But if we prompt too much things will remain obscured; forgotten.

Talking with my Grandmother was a very special experience and I wondered as I listened, when it was that she last spoke at length about her past? From memories of her father (who died in 1928), her Grandmother (born in 1864), to her own retirement, she took me on a journey from the mountains of Wales, to a public school in Cheltenham and on to the houses of Oxford, where she worked as a maid in the late 1920s and early 30s. But it was her reminiscences of her father which were particularly moving.

Through researching my family tree, I’ve got to know many of the names of family members, back as far as the beginning of the nineteenth century, but that, along with a few dates is all I know. My Grandmother wasn’t sure she’d be of any use to me in my research, but as I pointed out, her memories are worth their weight in gold. I can find names and dates, but it’s who these people were that matters most, and the only person who could help me was her.

Below is a photograph of my Grandmother’s father (my Great Grandfather), Elias Jones. 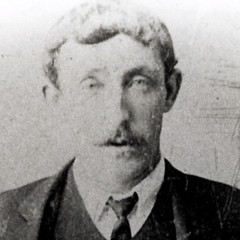 Born in Trevethin, Monmouthshire in 1882, he worked as a miner in the pit at Llanhilleth, a short distance away from where he lived with his wife Mary Jane and their five children, Ruth, Lillian (my Grandmother), Doll, Ray and George (one girl, Florence or Flossie, died aged 2 c.1918). With just a photograph, a name, dates and occupation, it’s difficult to surmise what he might have been liked. One tends to assume (unfairly) that miners in those days must have been – due to the harshness of their work – rather dour or surly people, but talking to my Grandmother, it became clear that as regards Elias, this couldn’t have been further from the truth. Below are a couple of extracts from our conversation.

On his walking to work:
“I can see him now, because he went up our garden over the road and the mountain started from there up… and he’d go so far up and he’d turn back and wave to us.”
On his being at home:
“I can remember now he would always help our Mam wash our hair on a Friday night… our Ruth would go first, she would wash it and our Dad would dry it and mine next…”
On his death:
“I can always remember the doctor in the room when we realised he wasn’t going to come through, he said ‘don’t grieve for him Mrs Jones, you know what he said to me, “if I can’t work for my wife and children I don’t want to stay.”‘ And he just passed away. “

Just these few, brief extracts tell me a great deal about the man in the photograph; a man who clearly loved his family and who through his working in the mines, succumbed to a disease of the lungs (possibly pneumoconiosis or ‘black lung disease’) at the age of just 42. And the image of him turning on the mountain to wave at his children below is one which will not only stay with me forever, but one I which would like to ‘explore’ in my forthcoming work. I had wanted to draw the outline of the mountain, but I also think it will be necessary to follow the route Elias Jones took, from his house, over the mountain to the pit at Llanhilleth.
Deaths in the mines (as well as deaths as a consequence of working them) were sadly nothing exceptional. And as my Grandmother poignantly explained:

“…when there was a death you know every blind in that street would be drawn, we knew directly we heard of a death the women would draw their blinds down and they would nearly all turn out to a funeral down there… Kind of almost took it in our stride you know, oh dear there’s another one gone, killed in the mines.”