When I interviewed my Nana, a year before she died, she told me a story about her father who she remembered walking over what she called the mountain on his way to work. She said:

That image of my great grandfather has stayed with me ever since, an image which seem to crystallise when I followed in his footsteps, walking from the back of my Nana’s old house in Hafodyrynys and up the slope of the ‘mountain’ as she used to call it. 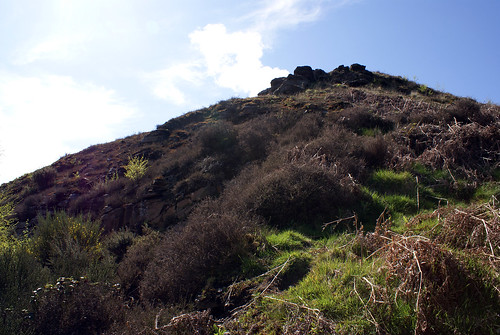 It was whilst reading The Duino Elegies by Rainer Maria Rilke, that I came upon the following passage:

“Who has twisted us this way round,
so no matter what we do we are always
in the position of one leaving? Just as,
on the last possible hill from which he can
glimpse his whole valley one final time,
he turns, stops there, he lingers –
so we live on, forever bidding goodbye.”

The image of my great grandfather, that which my Nana left me with, is almost exactly what Rilke has described in his poem. It isn’t just the image of him waving goodbye to his children, it’s also that of him saying goodbye to the world.

In his book, ‘The Past is a Foreign Country,’ David Lowenthal writes:

“‘Recognition does not always give us back the warmth of the past,’ writes Simone de Beauvoir; ‘we lived it in the present;… and all that is left is a skeleton.’ A long-ago scene recalled is ‘like a butterfly pinned in a glass case: the characters no longer move in any direction. Their relationships are numbed, paralysed.’ Her decaying ‘past is not a peaceful landscape lying there behind me, a country in which I can stroll wherever I please, and which will gradually show me all its secret hills and dales. As I was moving forward , so it was crumbling.’ Time’s erosion grievously afflicts what memories remain: ‘Most of the wreckage that can still be seen is colourless, distorted, frozen; its meaning escapes me.”