As I stood in the church hall following the service of thanksgiving for my Nan who died on September 16th at the age of 98, I looked towards the stage at the back of the hall, through the door on the left hand side and into the short corridor behind. At that moment, in a split second, a number of memories crashed down around me, as if the way I was standing – the shape of my body – had unlocked the door behind which they’d been piled. The Christmas Bazaar, when I was a child was one of them, in particular the lucky dip box filled with sawdust and prizes. That was the first. It had stood there, just before the stage near the steps. I can still smell the sawdust; I can feel it on my hands as I search, in my mind, for a prize. Father Christmas had always made an appearance and would hand out gifts in his grotto. It was, in many ways when Christmas began, even though it was always held in the last week of November. It was at the Christmas Bazaar that I bought Nan a hideous ornament – china flowers in a china pot; gaudy coloured and chipped.

When I heard my Nan had died (I was on holiday in Spain at the time) my mind, for some reason, took me into the room which once ran the width of the church behind the large cross at the front. It was once an open gallery (you can see it in a photo of my aunt and uncle’s wedding), but had long since been blocked off from the church. Back then, when I was a child, it was always full of junk. It was where Father Christmas has his Grotto, and whatever the time of year, there was something of Grotto about it, with or without the old man in the red suit. 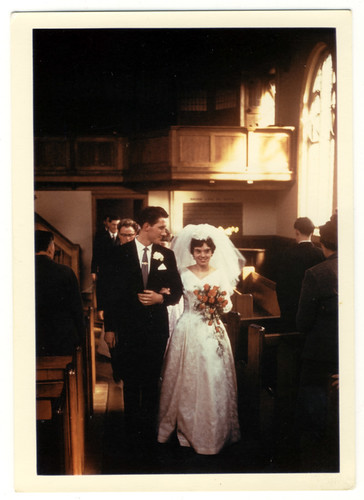 Back in the hall on the day of my Nan’s funeral, I could see the stage in my mind’s eye complete with the box at the front, one which ran the length of the stage, which when it was opened revealed a long line of lightbulbs. When I was a child, most of the bulbs were missing. You could see the sockets and the wires, but they hadn’t been used for years. There was a lighting box on the left hand side – just before the door through which I was looking – in which the old switches and levers had become grown over with time. In the single wooden panel, dividing it from the stage, was a hole through which you could see what was going on. My cousin and I had operated a tape player in there, some time in the mid 1980s for the performance of a pantomime whose name for the moment escapes me.

Inevitably, as I write, my thoughts are going to wander, as one memory leads to another, but back on the day of my Nan’s funeral, I thought about what I’d just remembered; the lucky dip, the Christmas Bazaar and the lightbulbs underneath the box. These were not isolated memories, they didn’t come to me like pictures in a gallery, one after the other. Instead they were physical and part of a web of memories, the threads of which seemed to vibrate with all that I had felt and experienced before. For a moment, when I moved, I could almost feel them again, I could hear the hubbub of the bazaar, see the stalls piled with jumble and the Christmas decorations hanging above. I was in the company of people who’d long since gone.

The photo below is of my Aunt and Uncle’s wedding reception, which took place in the hall. Very little has changed, apart from all the people. 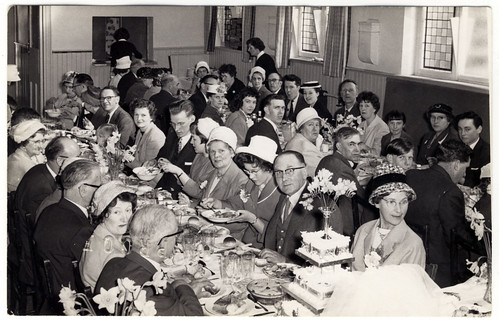 Back to the day my Nan died – it’s interesting that my first thought was of the room immediately behind the church, but hardly surprising when you consider, that along with my Grandad, she’d lived in a house just opposite the hall. The house and the church were linked by Sundays, on which day we would cross the road to the house to select our sweets from the sweet-tin. Bon-bons, lemon sherbets, candied peanuts, mint imperials… we could choose 5, 6 or 7; the number changed from week to week. I can see the tin now – a round biscuit tin, I can hear the sweets rattle as the lid is prised off.

Whenever we slept at Nan’s, my brother and I would find paper bags beneath our pillows in the morning, with a few sweets inside. Before bed, we’d have Ritz biscuits and grated cheese whilst watching TV. The television was one that had to warm up before the picture was fully revealed. I’m always reminded of Boxing Day when I think of the front room. That and the Two Ronnies – and in particular the Phantom Raspberry Blower. Seaside Summer Special too. I can feel the texture of the chairs and the sofa. It’s the afternoon on Boxing Day as I think of it now, and while some have gone to the football, everyone else stays in the warm, getting things ready for tea; cold meats, pickles etc.

I remember once, when I was 5 or 6, when my brother and I slept over at my Nan’s. It was in the summer, late at night. The night was warm and a storm was brewing. We couldn’t sleep and at about 11 or 12 o’clock, my Nan came upstairs and asked if we wanted to run around in the garden. Of course we did, and so out we went, into the garden with Nan as the storm approached. It was a simple thing, but in many ways a magical one. Back then, as can be seen from the photograph above, there was a large apple tree in the garden which I remember vividly that night. It’s gone now. A house has been built on top.

In the 1980s, the church was remodelled, with the space between the church and the church hall – which until then had been open to the elements – covered over. Many of the rooms were also remodelled. It was necessary, and no doubt it made the church more comfortable, but of course something was inevitably lost as a result, just as it was when the church itself was changed several years before. The corridor down which I’d looked from the front of the church hall, had once been part of a single room in which we had our Sunday school classes. I remember the tiny chairs and the out-of-tune piano in the corner. Leaving this room, you’d find yourself outside. A door straight ahead led to the toilet (always cold and full of spiders) and one to the left into the gallery room – or Santa’s Grotto. To the left, after the door to the Gallery Room and the just before the loo, a flight of metal steps led down to the church. A green gate blocked the way to the street, while the steps themselves were hazardous by today’s standards, especially in winter. I can still hear the sound they made as you walked down. At the bottom, you turned left and in front of you was another room (The Fellowship Room) and another toilet opposite (even colder and with even more spiders). In my mind it’s always damp here. I can always see puddles outside, and in the Fellowship Room there is the smell of old clothes; costumes which were always kept in a walk-in cupboard (blankets for Shepherds in the Nativity).