I knew a little about Thomas (see The Victorians) such as the fact his son – also Thomas – was killed in a train accident in Bicester in 1851, but I didn’t realise just how much his family suffered in the few years before and after.

Thomas was married to Mary Flecknoe in Daventry on 14 August 1820. Their children included:

Mary Noon died before 1841 and there are, according to the St. Sepulchre’s website entry two possible burials:

My hunch would be that our Mary Noon is the first of these. I can’t quite see why she would be buried in St. Peter-in-the-East, even though it states that that particular Mary was of Jericho. Given the date of 1832 – the year Emilia was born – it could be she died in childbirth. It would appear that Emilia herself died in 1837.

Two of Thomas’ daughters were married in the early 1840s at St. Paul’s church, which is now Freud’s cafe.

On 13 January 1842 at St Paul’s Church, Eliza Noon married William Cartwright, a coal dealer. They had both been living in part of the same house in Clarendon Street, and Eliza was described as being the the daughter of Thomas Noon, publican.

On 15 August 1844 at St Paul’s Church, Betsey Noon married Thomas Markham, a tailor, born in Oxford in c.1820. Both were described as being of Clarendon Street, and their marriage was announced in Jackson’s Oxford Journal. 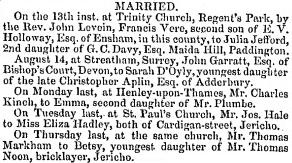 Eliza disappears after the 1841 census, and may be the Elizabeth Cartwright who died in the Jericho district at the age of 24. She was buried in St Giles’s churchyard on 25 January 1846.

Betsey died 4 years later, at the age of 26 and was buried in St. Sepulchre’s.

A year later, Thomas (Jr) was killed in a train crash at Bicester. He was buried with his sister, his funeral described in Jackson’s Oxford Journal.

The following year, 1852, his brother, Elijah, killed his wife in Jericho. Thomas died in 1863 and was buried in the same grave as his son Thomas and his daughter Betsey.