Today I discovered, much to my delight, that The British Library has on its website a database of 19th century newspapers including 100 years of Jackson’s Oxford Journal. From 1800-1900, every issue is available and fully searchable. It goes without saying how incredibly useful this is and no sooner had I logged on than I began to search for information about my ancestors, in particular those whose activities I have described in previous blogs.

Perhaps the most notorious of my ancestors is Elijah Noon, who murdered his wife Charlotte with a sword in Oxford in 1852. I dealt with this crime at length in an installation which I put on in the cemetery where Charlotte was buried (see www.nicholashedges.co.uk/murder for more information) but soon discovered, thanks to The British Library, a whole lot more that I would never have otherwise found.

The website also allows users to download articles or pages as PDFs. Those about the murder are available here:

I’ve read these stories before, but in another article, I discovered that a nephew of Elijah’s had recently been killed in a railway railway accident at Bicester, not so far from Oxford. Elijah’s older brother, Thomas Noon,  was a builder in Oxford and a man who it seems was very much respected. Having searched for news of an accident some time around 1852, I discovered that Thomas Noon’s son, also called Thomas, who was a Corporal in the 7th Company of Royal Sappers and Miners, had been killed in a railway accident on 6th September 1851. He was buried in the same cemetery (St. Sepulchre’s in Jericho) in which his aunt would be interred less than a year later, his funeral attended by ‘an immense concourse of persons.’

Elijah Noon served just two years in prison for the murder (or ‘manslaughter’) of his wife. In 1880 and 1882, he is listed as a prize-winning ‘bird-fancier’.

One article I was shocked to read concerned a fight which took place in Summertown on 29th December 1869. The article reads:

“Elijah Noon and George Hedges were fined, the former 7s. 9d. and the latter 10s. 6d. for being drunk and riotous at Summertown on 29th Dec. last. P.C. Culverwell substantiated the accusation and stated that the defendants were stripped to fight, when he stopped the disturbance going on.”

Elijah Jr. had something of a drink problem. In September 1883, William Francis Piggott of Summertown applied for the renewal of his licence, which it seemed had been revoked on account of Elijah’s drunkeness.

Elijah of course had had a traumatic childhood having witnessed the murder of his mother at the hands of his own father. It seems his was an unhappy life, one which ended tragically when he choked to death in The Grapes, George Street in 1885 (click here to read more).

What George’s excuse was I don’t know, but he was, as I’ve said, often in trouble. In 1861, at the age of 15, he was already in attendance at the Petty Sessions in County Hall. In 1867 he was sentenced to 21 days hard labour for stealing wood and in 1888, fined for a disturbance, again in Summertown.

George had a brother called Edwin. Their father, my great-great-great-grandfather, was called Richard, and in 1858, a Richard and Edwin Hedges were convicted of an assault on a certain John Harris. Whether this Richard and Edwin are my ancestors is debatable, but it would seem to concur with George’s general behaviour, and indeed that of the family. One story, which certainly involves George and indeed, it seems, the whole family, took place in Summertown in 1899. It’s described under the rather inappropriate heading of ‘Family Squabble’ and involves William Bowerman, who married Elizabeth Hedges – George and Amelia’s daughter – in 1894.

Bowerman and Elizabeth had been drinking in the Cherwell Tavern, Sunnymede when ‘there was a quarrel’. Elizabeth went to her parents’ house where she was followed by her husband. He knocked on the door, Amelia answered and Bowerman, so it was alleged, punched her in the face. Her son Harry and her husband George went out to ‘remonstrate.’ Bowerman hit them both and Harry hit him back. The scan of the report is a little ‘wonky’ but it can be read here.

Interestingly, I have a photograph of my ancestors taken in 1899 – one assumes before the brawl. 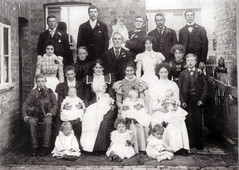 I have (tentatively in some cases) identified them as follows: