The Past is Time without a ticking clock. A place whose paths and roads are measured in years. The Present is where the clock ticks but always only for a second; where, upon those same paths and roads we continue, for that second, with our existence.

My first encounter with history, as far as I can recall, came when I was 7 years old. During a family holiday in Dorset, we visited Corfe Castle, a picture-postcard ruin which towers over the small village of Corfe below. I have two particular memories of that visit. The first is of a postcard which, in my mind’s eye I can still recall quite vividly and which I’ve since found for sale on the web (and purchased). 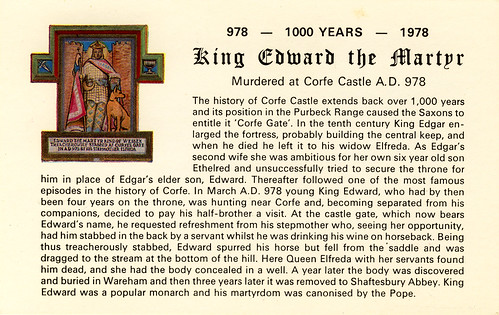 Most of its design comprises text commemorating the assassination of Edward the Martyr (reigned 975-978) a millennium before. There are two dates at the top (978-1978) and I can remember clearly looking at the year 978 and trying to conceive of a date which didn’t begin with a ‘1’.

The very idea of a 1000 years ago fuelled my imagination; the very fact the place in which I was standing witnessed such an event a 1000 years before I was even born set in motion a chain of thought which has remained to this day. Even though I was only 7, I remember considering my own non-existence, albeit in ways a 7 year old might imagine such a thing. Three years before in 1975, my great-grandmother (born in 1878) became the first person I knew to die. It was shortly after her death, that the very idea of death began to trouble me and in some ways I think the thought of a 1000 years ago presented itself to me as death in reverse. Again, this way of thinking about the past has remained with me ever since, which might go some way to explaining why I tend to visit places synonymous with trauma and death.

It was in the small museum in Corfe Village that I remember staring at a cannonball fired during the English Civil War. I can recall trying to see it as it was hundreds of years before I was born. This wasn’t just an object sitting on display; it had once been handled by people, it had flown through the air and had played a part in the castle’s destruction. I wasn’t just looking at the cannonball, I was trying to imagine its flight.

So in this postcard and the castle at Corfe my passion for history began, and this short text is the opening paragraph of a very long story which I’ve been reading ever since.