On Friday last week I paid a visit to my old school (Northway Midddle) which is due to be demolished in the next few weeks to make room for houses. I left the school in 1984, the year that it was closed, and even then it was clear that the preferred option of many was to pull it down and make room for houses. Ever since, the building has remained standing in a kind of limbo, part community centre, part office space and having heard the decision last week to finally put the place out of its misery – a decision which seems absurd given its potential (potential which the council couldn’t see if it picked up a football and did six hours of keepy-ups) – I decided to try and gain entry and take a few photographs before it’s lost forever. 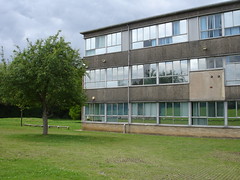 Granted, Northway School is not the most beautiful of buildings, but with its gym and playing fields, art room (including a walk-in kiln) and stage it could have been turned into a first class sports and cultural centre. Of course the council were as unimaginative in 1984 as they are today and instead it became a wasted space. And whatever the merits – or otherwise – of the building itself, it’s nonetheless a piece of the area’s heritage. It’s played a major part in the lives of many people and deserves to be recorded.

Therefore with my camera I endeavoured to do just that. I had been warned that the interior of the building had been altered a great deal after 1984 but even so I wanted to find something, one image that encapuslated what the place meant to me and many others. Standing inside the building for the first time in 25 years I could see just how much it had changed (rather like myself), and as I walked around in the company of the caretaker, I found that my memories were somehow scrambled as if by by the stud walls and altered layouts of the rooms. Nevertheless I started taking pictures, attempting to jump start my memory, as if the camera was a defribulator for my brain. 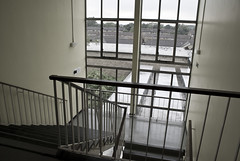 The stairwell hadn’t changed a bit and I could almost hear the sound of the school bell and voices chattering. But in most parts of the school’s trashed interior it was as if I was walking in a place I’d never been to before. Even the view through the windows had changed almost beyond recognition. The John Radcliffe hospital loomed ever larger and the playground had already been turned into houses. Only the imposing tower block on the estate anchored the view in the past, and catching a glimpse of it through a few of the windows started the memories coming. 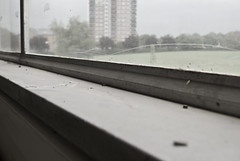 After about half an hour and having walked around the school from top to bottom, I began at last to recall things, to see memories much more clearly. I was able to remove the stud walls and new corridors and reimagine how the place had looked when I was there. I remembered the maths room and Mr Smith. I could recall how he’d turn on the lights before appearing. In looking out the window, I could also remember that I’d been in this room when my grandad had died on January 13th 1984. It was around 2.15pm when he passed away. 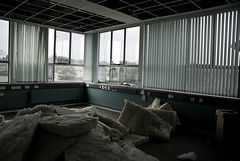 Perhaps the room I remembered most clearly and that which was the most recognisable was Mrs. Bantam’s. She was my teacher in the first year and even though the room was just a shell, I could easily recall how things had looked, what it was like to move around inside. The way we move around a given space and the way memories are ‘attached’ to such a movement became very apparent here. Whereas before (except on the stairwell) familiar paths through the building had been blocked by ‘new’ partitions and so on (particularly in the third year area), here those paths remained intact. Memory isn’t only triggered by what we see and hear and what we smell, but the way we move through a space. Memory is kinaesthetic. 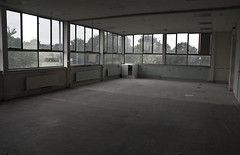 After about an hour I had to leave, finishing with photographs of the windowsills into which some pupils had scratched their names.

As I think back to my visit, I don’t so much see the things I saw then, the images which you can see on the photographs, but rather my memories, which despite the altered condition of the interior have become sharper – at least in places. 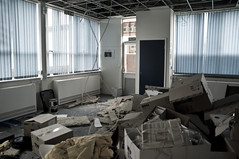 The above picture was once the science room, the domain of Mr. Hipkiss. The room I remember as being dark. There were high wooden desks, a blackboard in the corner and the strange lingering smell of chemicals which were kept in a room at the front of the class. We had to cover our books in wallpaper (woodchip in my case) and it was in this room that I first heard the word Google. In fact, I now recall how Mr. Hipkiss had written the number (a Googleplex, one comprising umpteen noughts) on a long sheet of paper. I can see it now on the wall. I seem to remember black blinds which might account for the fuliginous aspect of my memory and the faces Mr. Hipkiss drew of eminent scientists which were always photocopied so the text and drawings were pink. They weren’t true likenesses, he told us. He had made them all up. 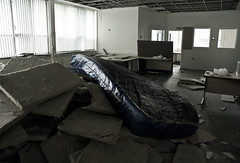 The above picture shows the old art room and at the back was where we had cookery lessons with Mrs. Braybrooke. 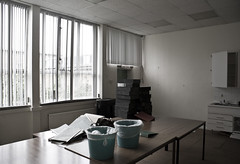 This room was a basic woodworking room and general craft area which had a walk-in kiln. So which photograph encapsulates my time at the school? Well it would have to be the second photograph in this blog, that which I reproduced below.

Memories are, as I said kinaesthetic and nowhere are the paths through the school better preserved than on the stairwell. How many times did I walk up and down them? Impossible to say. All I know now is that I won’t ever again and soon no-one ever will.