I have written at length on the tragic story of my great-great-great-grandmother’s murder in 1852 and am in the process of using her story in a proposed public art installation in the cemetery where she’s buried. In the newspaper report of the time, mention is made of her children:

“He [Elijah Noon] appeared to feel very acutely the awful position in which he had placed himself and the irreparable loss which he had inflicted on his household, consisting of five children the youngest being only a few months old, and not weaned. The desolate condition in which these poor children are suddenly placed by the death of their mother, and imprisonment of their father is pitiable in the extreme and increases the painfulness of this most tragical event.”

One of these children was my great-great-grandmother, Amelia Noon. Born in 1846, she would have been 6 years of age at the time of her mother’s death and would have been in the house during the attack. What she saw or heard I cannot say, but one can assume that the whole event would have scarred her in some way.

I never thought I would ever see what she looked like but recently I received a photograph of my great-great-aunt’s christening. Winifred May was born in 1899 and was the daughter of my great-grandparents Ernest Hedges and Ellen Lafford. To celebrate the event of her christening, a group family portrait was taken in the back yard of the house and amongst that number was Amelia Hedges (nee Noon) pictured below. 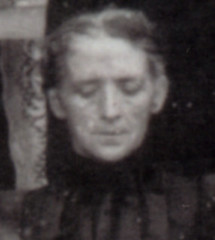 She is the only one in the photograph looking down and it’s tempting to suggest her face and her expression reveal something of her past. Of course, to say that would be pushing the bounds of reasonable conjecture but there is nonetheless something sad about this image. It could be that she just happened to look down at the moment the picture was taken, but there is something about her downcast eyes which reveals, in the midst of a happy, family moment, a memory of her own family. As I have also written, the death of her mother and the imprsionment of her father was not the only tragic event of her life. Her brother, also called Elijah, choked to death in The Grapes public house fourteen year before this image was taken.