Back in the spring when I visited Hafodyrynys with my Dad and my girlfriend Monika, we found ourselves – whilst clambering over what my grandmother has always called the ‘Mountain’ – in the company of a farmer, who, with his two sheepdogs, took us on a short tour of his land overlooking the village. He was a man who having been brought up in the area knew that part of the world intimately, and who, as he traced the blue horizon with his hand, reeled off a list of villages resting amongst the hills and fields rolled out below. As we looked over towards the town of Llanhilleth, where my great-grandfather, Elias Jones, had worked as a miner, I couldn’t help but imagine him standing there 100 years before, looking at the same villages and reeling off the same names. Down below, in Rectory Road, he would see the house in which he lived, and in which also lived my grandmother as a child.
Elias Jones died of lung disease in 1929 at the age of 47, caused as a result of breathing in coal dust down the mine in which he worked. He was buried in the churchyard at Cefn-y-Crib, where his wife, Mary Jane, would be buried 40 years later. Also buried in the same churchyard, as we saw that day, was Elias Jones’ father, my great-great-grandfather, Henry, who died in 1889 at the age of 49 when Elias was just 7 years old. 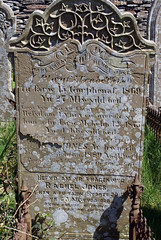 We could see the churchyard from the brow of a hill as we stood in the company of the farmer and his dogs, and in between, a scattering of buildings, vivid and white against the green of the fields, made darker for a moment by the looming presence of clouds which gathered around us as if to experience a view which they would know for only a very short time. 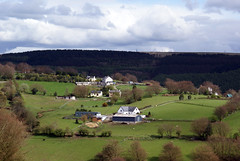 It was as we looked that the farmer pointed to one of the buildings and explained how in December the previous year a young woman was found hanged inside. It was a story which seemed at odds with the beauty of the landscape – a landscape which, nevertheless, just as it had shaped the existence of my paternal family, had shaped the death of this young woman.

In amidst the fields, the seemingly empty barns and houses, and bordered by the forests which clung to the hills surrounding us, one could feel very small and insignificant. In a place such as this one’s awareness of self is augmented, or at least, one’s awareness of individuals. Indeed, of all the people I have researched so far, the two which to me are perhaps the most clearly defined are my great-grandfather, Elias, and my great-great-uncle, Jonah Rogers, who was killed in 1915 in the second battle of Ypres. Perhaps this is in part because of the place in which they lived (and in which that day I was standing), not so much because it’s changed so little, but because its shape, its beauty and its timelessness, serve to delineate the individual better than any city.

I’d always heard that one of my ancestors on the Welsh side of the family had been killed in a mining accident, but I’ve never found anything to even vaguely corroborate the story. Of course accidents were common as my grandmother recalled, remembering how blinds would be drawn in all the windows when another body was brought back up to the surface. Having seen Henry Jones’ grave, I decided to obtain a copy of his death certificate to see if perhaps he – having died young – had been killed in an accident of some kind. As it turned out, the truth was indeed tragic, but for altogether different reasons.
It took me a while to decipher the spider-like writing of the registrar, but suddenly it hit me; cause of death, “suicide while temporary insane,” place of death; Cefn-y-Crib.