Having discovered that my great great-uncle, Jonah Rogers, was a Private in the 2nd Battalion of the Monmouthshire Regiment (he was killed in active service on May 8th 1915 and is commemorated on the Menin Gate) I began searching for anything which might tell me more about the place in which he fought and died. Fortunately, I happened upon a book which couldn’t be more useful; ‘A History of The 2nd Battalion The Monmouthshire Regiment’ compiled by Captain G.A. Brett, D.S.O., M.C. in the 1930s.

The first thing I wanted to do was be sure that this book covered the history relevant to Jonah, and in the back, in the Roll of Honour, I found him, ROGERS J., one amongst many other names. 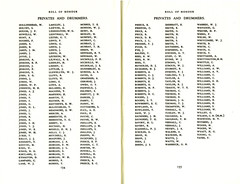 In the book, the author relates in great detail information concerning the preparations for war and the route the Battalion took as it moved into the theatre of this terrible conflict. It seems that there were three units of the 2nd Battalion, the first formed from the outset of war in August 1914, with two and three following thereafter. I wondered to which unit Jonah had belonged. The following is a passage taken from the book:

“The 7th November, 1914, is an historic date for the and Monmouthshires, for early on the morning of that day the Battalion landed at Havre on active service. Over four long and terrible years were to drag their slow length before it would recross the narrow sea from France, and few of those who disembarked with it were fated to return with it. Its strength on landing was 30 Officers and 984 Other Ranks. Before it came home t8o Officers and 3,878 Other Ranks had passed through it. But they had earned for their Battalion a name for fighting and endurance of which their county, with all its old traditions of border pugnacity, could well be proud. While some of the officers came from other counties, a few indeed from the colonies and abroad, the vast majority of the men were from the mining valleys of Monmouthshire, every town, village and hamlet of which must at one time or another have been represented in the 2nd Battalion.”

The key part of this passage is of course the date, 7th November, 1914, and having consulted Jonah’s medal records, I discovered ‘the date of entry therein’ corresponded exactly: 7-11-14. 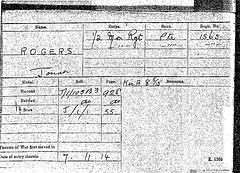 The movements of Jonah Rogers and the 2nd Battalion can be listed as follows:
5th August 1914 – Orders to mobilise the Battalion.
6th August 1914 – 7.30pm. The Company entrained at Crumlin nearly 100 strong, en route for Pembroke Dock.
Evening of 7th August 1914 – The transport moved off and halting for the nights at Llanellen, Hereford, Ludlow and Church Stretton, completed the march to Oswestry on the afternoon of the 11th August 1914.
20th August 1914 – The Brigade moved to Northampton where the Welsh Division was concentrating.
Evening of 5th November 1914 – The Battalion embarked at Southampton on the ‘Manchester Importer’.
6th November 1914 – Arrived off Le Havre and anchored until night.
7th November 1914 – The Battalion landed in Havre.
8th November 1914 – Entrained, arrived at St. Omer, 10th November 1914.
18th/19th November 1914, passed fit by Inspector or Reserve Troops, marched to Bailleul, halting for the night at Hazebrouck and reaching Le Bizet the following day.
21st November 1914 – ‘C’ and ‘D’ company enter the trenches, relieved by ‘C’ and ‘D’ on the 23rd.
2nd December 1914 – 2nd Monmouthshires relieve the 2nd Essex, taking over a battalion frontage of eleven hundred yards of trenches.
Christmas Day 1914 – Informal Truce
January 1915 – Redistribution of troops. The forward company of the 2nd Monmouthshires, which was relieved every 2 days, held some cottages and some trenches behind Le Ghier Wood.
20th February 1915 to end of March 1915 – The Battalion relieved the 2nd Essex taking over the same frontage occupied in December.
2nd May 1915 – 2nd Monmouthshires experienced the heaviest shelling they had yet encountered. Later in the day, the enemy launched a fierce attack under cover of asphyxiating gas.
Night of 4th/5th May 1915 – The Battalion relieved the 5th South Lancashires about Weiltje. Another heavy gas attack, not followed up by infantry assault. The position included Mouse Trap Farm (known also to the British as Shell Trap Farm).
8th May 1915 – Battle of Frezenberg Ridge with desperate fighting ensuing for the following six days. Private Jonah Rogers was killed in action on the 8th May 1915.
Although I have no photographs of Jonah, there is a photograph in the book showing a front-line trench in 1915. It’s impossible to say whether one of these men is Jonah, but what one can say is, he was no doubt just like them. 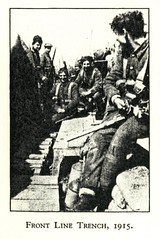 The following is a map of positions occupied by the 2nd Monmouthshires during the 2nd Battle of Ypres. You can see (click on the image for large view) that on the day Jonah was killed, they were positioned in Shell Trap Farm.