At the end of Nobbys beach can be found Nobbys Island. Once a rocky outcrop, the island was joined to the mainland through work carried out by convict gangs between 1818 and 1846. In 1855, the quarried summit of the island (the rock of which had been used to create the pier joining the island with the mainland) was cut down from 62 metres to his present height of 28 metres. A sign near the island explains how the local Aboriginal people, the Awabakal, believe Nobbys Island was created in the time of the Dreaming by the great rainbow serpent as it pushed itself onto the land after it had dropped from the sky into the island. To read how it was mined for coal (after being surveyed by Lieutenant John Shortland who surveyed the bluff during the 1790s) and then – being a danger to ships – reduced by almost a third in height, makes one feel sorry, especially in light of the beliefs of the Awabakal people. 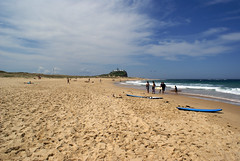 The importance placed on rocks by Aboriginal people is also described near Newcastle beach, where a sign describes Yi-ran-na-li, the Aboriginal name for the cliff which, the sign tells us, is known by them as being a place of silence and respect. The cliff was – or rather is – a sacred place and the sign itself something of an apologia, the text of which is worth repeating here in full:

“In the 1880s, John McGill, an Awakbal man, also known as Biraban (Eaglehawk) told the missionary Reverend Lancelot Threlkeld the story of Yi-ran-na-li whilst passing beneath the cliff one day.

‘There is a sort of scared place near Newcastle on the sea-beach, beneath a high cliff named Yi-ran-na-li, it is said, that if any person speaks, the stones will fall  down upon them, from the high arched rocks above, the crumbling state of which is such as to render it extremely probable, that the mere concussion of air from the voice would cause the effect to take place.

I was walking beneath the projecting rock and called loudly to McGill , who with other blacks, were with me. He instantly beckoned me to be silent, at which I wondered, a few small stones fell down from the crumbling overshadowing cliff at that moment, and they urged me on.

When we had passed out the precincts of the fearful place, I asked what they meant by commanding my silence, and pushing on so quickly without speaking? This elicited the tradition of the place as a very fearful one, for if any one speaks whilst passing beneath the overhanging rocks, stones would invariably fall as we had just witnessed.’ (Threkeld in Gunson 1974:65)

The large rock fall in 2002 perhaps marked Yi-ran-na-li’s final stand. It was a rock so large that we couldn’t ignore it. The rock was a statement about our inability to live within the constraints and sensitivities of place. Despite the removal of the rock and the total reshaping of the cliff face to make it ‘safer’ we should not forget the cultural belief of the local Aboriginal people that this place was to be feared and respected.

The cliff speaks to us with a wisdom that is thousands of years old. McGill knew this cultural wisdom but we have failed to listen, and today we still have so much to learn about the many other aspects of an endemic sense of place and about the environment we live in.

It is not too late to show the respect that Yi-ran-na-li deserves.’

The photograph below, shows Yi-ran-na-li today: 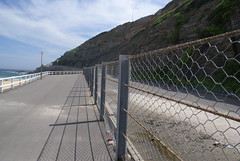 I was struck by the last paragraph admitting to the country’s failings as regard its indigenous population and their ancient heritage (although this is in no way only an Australian problem: America, Europe, and in particular Britain have shown throughout history a blatant disregard for the culture of those people on whose countries it has claimed dominion). As regards Yi-ran-na-li, how can such respect be shown when, as the text also describes the rocks – like Nobbys Island – have been reshaped? Should the fallen rock have been removed? Would it not have been a good idea to leave it as a reminder of cultural ignorance and its consequences? It seems to me there is a strong correlation between failing to listen and speaking when we shouldn’t. Also, the fact the sign contained a few typos didn’t really help as regards the sincerity of its message. I’ve no doubt that it is sincere, but small things like spelling the ‘thre’ undermines its message nevertheless.