A few days into the residency now and I’ve managed to do a fair bit of research around Newcastle, carrying out a number of walks and working on some video pieces down on the beach. I came to Australia with ideas as regards work I wanted to carry out and that is going according to plan, but it’s always important when coming to something like this to leave room for work to develop as a consequence of initial and ongoing research. The first week was always going to be a time for gathering information, which I’ve done as a result of the walks around town, and through these, a number of areas which I couldn’t have known about before coming here have interested me. One of those areas is the story of Yi-ran-na-li, the Aboriginal name for cliffs near Newcastle beach. To see them surrounded (for reasons of safety) by a wire fence is a little sad to say the least, and the fact the sign describing the cliffs and the lack of respect they’ve received (‘it’s not too late to show the respect Yi-ran-na-li deserves‘) – contains spelling mistakes is far from encouraging. It’s a small thing, mis-spelling ‘the’ as ‘thre’ but it seems to speak volumes nevertheless. A work about this, entitled ‘Thre’ might therefore be on the cards.

The town of Newcastle is the world’s biggest exporter of coal, and the vast ships which come and take the coal away interest me a great deal. They look almost like a photoshopped image when you see them lined across the horizon, as if someone has done a cut and paste job with a single ship. Nobbys island – now attached to the mainland via the Macquarie Pier – was surveyed in 1797 by John Shortland who spotted coal seams and set to work having the island mined. The island itself was regarded by the Awabakal people as having been created in the time of the Dreaming by the great rainbow serpent as it pushed itself onto the land after dropping from the sky. It was also thought to be home to a giant Kangaroo, and again its rather sad to see it reduced from its original height of 62 metres to just 28.

Below is an image from the State Library of New South Wales showing Nobbys Island and Pier in 1820.

Compare this with how Nobbys Island looks today. 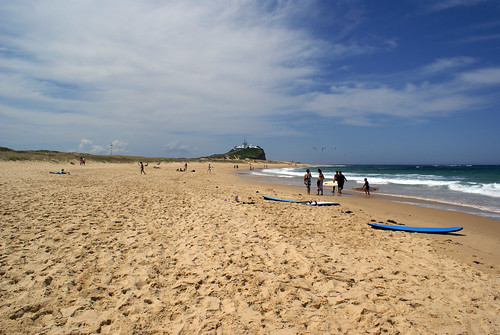 The importance placed on rocks by the Awabakal people finds a connection with the importance placed on coal by ‘modern man’. Seeing the ships come and take the coal away seems almost a metaphor for the ships which brought the convicts and took away something of the country’s ‘innocence’. Of course, one has to be careful not sound accusatory, rather, this is analogous to modern man’s destruction of the world for the sake of capital gain. Something is lost and the cliffs of Yi-ran-na-li remind us that sometimes we just need to listen.

Listening was something carried out not far from Yi-ran-na-li, up on Shepherd’s Hill. The idea of the Radar as a metaphor for listening interests me, as well as the idea of looking out across the sea for approaching ships etc. The ships bringing the convicts, and the ships coming to take away the coal.

Whilst taking notes on one of my walks (walk 4) I wrote: The radar beeps of several crossings. This alludes to the crossings here which beep continuously until, with what sounds like a blast from a ray gun, you are given the go ahead to walk.

The idea of looking for the individual – a theme central to my work – becomes important here. In order to find those people, we sometimes have to listen to what the rocks have to tell us. Of course, for rocks we might substitute buildings, houses, roads, pathways etc. And as we walk amongst them, we are like a radar, a signal which looks for that which is invisible, and which returns – not a blip or a shadow on a screen – but what we might term an empathetic response.

Whilst videoing on the beach, I became interested in the clouds, in the way they changed almost imperceptibly, looking – at a glance – as fixed as any sculpture, or in fact a photograph. Given the colour of the rain clouds, the contrast between dark grey and white, the connection with an early black and white photograph is strong – at least in my mind! Of course photographs don’t change, but the movement of clouds when studied over a period of time reminds us perhaps that the people photographed were part of a moving world, and that that world also had its clouds. Like the past, the world carried on beneath them, just as it does today.