I arrived in Newcastle, NSW yesterday afternoon after a 3 hour train journey from Sydney. The journey itself was pleasant enough, save for the moment a rather loud couple got on and upset the peacefulness of the carriage. She kept going on about how “it wasn’t against the law” in such a way as to suggest that whatever it was that ‘wasn’t against the law’ was in fact against the law and was, furthermore, something she had done. Her partner then proceeded to take off his t-shirt, flap it out as if shaking sand from a beach towel, before leaving it on the seat in front of him. There he sat in all his glory; no top, flabby, hairy and covered with tattoos. If this wasn’t bad enough (and believe me it was) he then proceeded to comment on the magazine he was reading. “You can see he’s a Beckham!” he kept on. “He’s just like his Dad.” Imbecile.

I moved upstairs and enjoyed a peaceful rest of the journey. Something I like about Australian train carriages is the way you can move the seat-backs, so that where you have two seats facing each other, you can flip the back of one so they become two seats facing the same way; very natty.

The journey to Newcastle takes one through some lovely scenery as well as that which isn’t quite as nice. Many of the towns we passed through seemed rather down at heel to say the very least, comprising a hotch-potch of painted sheds and shacks. Newcastle however, appears to be a very pleasant town which I will explore shortly.

The residency itself is at the Lock Up Cultural Centre which was once a police station. The Lock Up refers to the cells (including a very rare padded cell) and exercise yard which I will document later. My apartment and study is on the first floor and is very pleasant as can be seen in the photographs below: 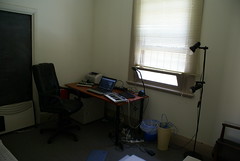 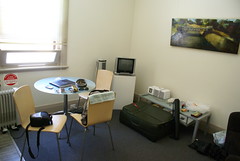 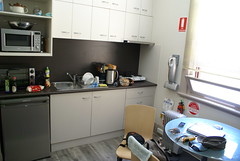 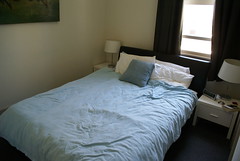