On 28th October 1828, the Marquis of Hastings sailed into Port Jackson after a 4 month journey from Portsmouth, England. Aboard was Stephen Hedges, the brother of my great-great-great-grandfather, Richard. Today, 172 years later, I took the Manly Ferry to Circular Quay in Sydney, sailing into Port Jackson also on October 28th. Quite unplanned, it was an interesting coincidence. Of course, the manner of our arrivals couldn’t have been more different. Economy class cabins may offer less legroom than business, but 22 hours on a plane with meals and entertainment certainly beats 104 days in a stinking hold fettered in chains. 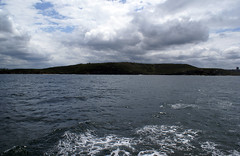 As we travelled out of Manly, I noticed the clouds, one of the few things which, even though they’re ephemeral, are nevertheless, consistent over centuries. Clouds have interested me in relation to the story of Stephen Hedges ever since I read the meteorological charts of William Rae, the ship’s surgeon. The immediate landscape may also have changed (to say the very least) but the sky and the water below are little different to all those years ago.

To reach the Manly Ferry I had to walk along the Manly Coastal Walk as well as a few suburban streets, and it was whilst walking down those streets that I realised how different the birds sounded. Certain things weren’t so different as regards comparison with England, but the sonic suburban landscape was quite alien; birds seemed to make noises like someone twiddling knobs on an old analogue synthesizer. That’s not to denigrate Australian birdsong – just an interesting difference.

Also, as I walked down the road, I found myself experiencing a part of my past – not a specific part, but a sense of what a part of my past was like. I have very strong sense impressions of the summer holidays when I was about 6 or 7 years old; dry sand in the sandpit, the pattern of dappled sunlight on the pavement leading to the shops and the smell of creosote on the fence. In this far-flung street on the other side of the world, I found myself walking within that sensation, as if somehow, I was physically experiencing a memory. 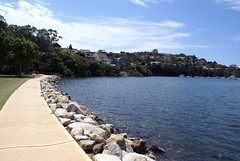 Strolling along the Manly Coastal Walk, I saw and heard the sea lapping at the rocks and on the beaches, and I thought – as I’ve often thought before – how that very sound has remained unchanged for millions of years; a sound which, given the way that it’s inspired and beguiled humankind for centuries, seems intimately bound up with man, rather than something which existed long before Man had even evolved. I thought too how this place had for so long evaded explorers and yet it had always been there in all its vastness – the past as a foreign country; there but out of sight and almost unreachable. 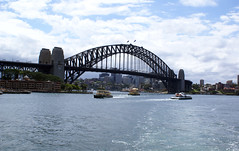 Like many people around the world I have seen countless images of Sydney Opera House and the Harbour Bridge and yet, despite their status, I felt a small shiver as we sailed up and saw them appear in the flesh. I have seen them, but i hadn’t until today experienced them. The iconic shape of the Opera House defined the ‘presentness’of that moment in time, a ‘presentness’ shared by all those aboard the Marquis of Hastings in October 1828. 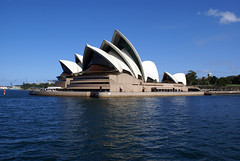 Although everything looked entirely different, the ‘presentness’ of that lived moment in time was just the same. I was arriving in Port Jackson, carrying with me all that had gone before, just as everyone onboard had done. Today they are names on lists and often very little more – lines drawn in water. But by following the line of the Marquis of Hastings and drawing our own, we come a little closer to making the men more than just names. They cease to be outlines, and instead become like countries.