South Park in Oxford is a place which holds many memories for me; from cross-country runs at school, to Fun in the Parks, Firework displays and Radiohead in 2001. A view from South Park features in a Laurel and Hardy film ‘Chumps at Oxford’ and it’s been suggested (probably erroneously) that it’s the inspiration behind the Small Faces’ 1967 hit ‘Itchycoo Park’.What interests me most about the park however are the undulations with which it’s covered as shown the image below. 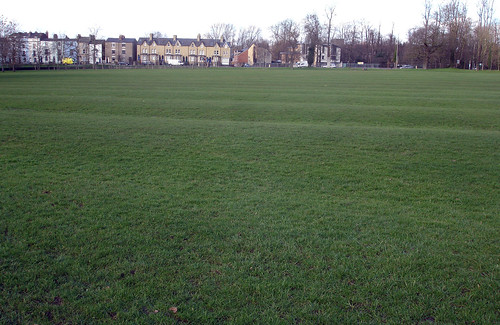 These undulations are landscape features created as a result of mediaeval farming methods known as ridge and furrow. Strips of land owned by individuals would be ploughed in such as way as to cause the ridges and furrows to form. Crops would be planted on the ridges while the furrows would help with drainage, and even today, one finds oneself walking along the ridges as the furrows are often boggy.

I find it amazing that an activity performed by people many centuries ago can still be seen so vividly in the landscape today. One expects to find features such as castle mounds, ditches and defensive (or siege) works,  but to see something created as a result of man’s interaction with the landscape over the course of time (in the growing of crops) is particularly interesting – not to say poetic. Individuals, long since lost to the past, worked the land so as to feed themselves – or make a living – and so perpetuate their ‘line’, and in the landscape, centuries later, the line still continues.

The lines continue too whenever we walk the ridges, for as we walk, we’re doing something people did hundreds of years ago (albeit without a plough) in exactly the same place.  As if the ridges are the grooves of a record, we find ourselves replaying a time when much of the land around the city comprised fields and meadows.