For the past day and a half I’ve been working on the East Oxford Archaeological Project, digging a test-pit in a garden in Iffley Village. Although I’ve had an interest in archaeology for a long time now, I’d never dug before and so the last two days have been both good fun and very informative.

The weather on the first day was good and digging was fairly easy (save for some roots). As I said, I’d never dug before so it was interesting – even on this small scale – to see the process involved; how everything was   observed and recorded. 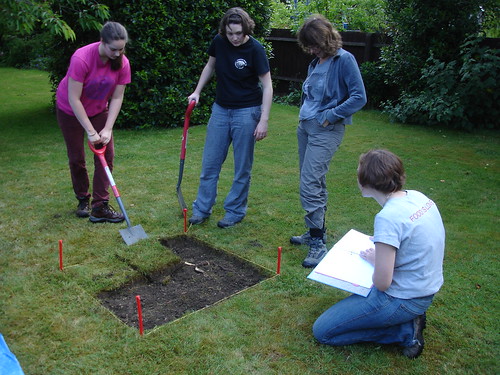 There were a few finds; miscellaneous bits of pottery (including fragments of flowerpot and a possible Roman rim!), a curious brooch-like item, some bits of clay pipe and the piece-de-la-resistance, a Roman coin from the reign of Emperor Postumus (AD 260-269). The image below shows the position of the coin being recorded with GPS. 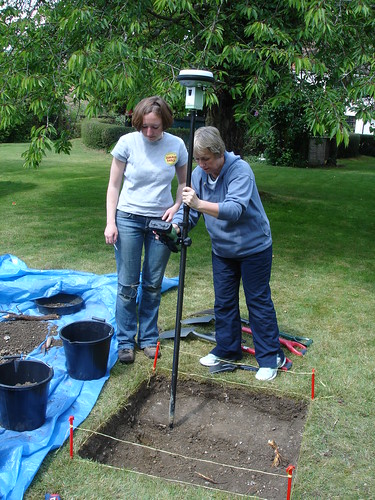 Now, most of us in our time have seen a few Roman coins; not least in museums. But finding this one coin (which, I was told, was in suprisingly good condition) was quite remarkable. It’s not a rare coin; it isn’t worth a great deal of money, but that we were the first to see it and to touch it in over 1700 years was amazing. Indeed, the very fact that in the 3rd century someone had walked nearby and dropped the coin where it lay in the soil until its discovery yesterday astounds me. The 3rd century seems – and in many ways is – a completely alien world, and yet, as the coin reminds us, it was the same world as we inhabit today.

Coins are of course objects of transaction. They are given by one to another in exchange for – amongst other things – goods and services. And behind every coin is a complex network of these transactions of which we, as finders, become a part – as much a part as the person who dropped it over 1700 years ago.

It’s also astonishing to think that, within the local context, the coin was lost centuries before Oxford – now regarded as an ancient university, was even established as a town. I couldn’t help think, as I stood in the garden, of how the local landscape looked when the coin was lost, and to then make my way within my imagination down to the centre of town, to ‘see’ what was there.