Windows in images are, as I’ve discussed previously, evidence of people living their lives without a thought for the subject or subjects in the photograph. This entry examines a number of details taken from photographs of Oxford at the beginning of the 20th century.

This detail below, from a view of the High Street taken in 1907, shows the open windows of what was then the Mitre Hotel. 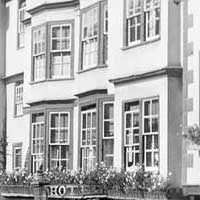 Perhaps these windows were opened by guests visiting the city over 100 years ago, or perhaps by maids in preparation for their visit. But what was taking place behind these windows when the photograph was taken? What conversations were being had? As I’ve said above, whatever they were and whatever was happening within, the open windows serve to give life back to a place from which the photograph was taken. The rooms become portals to unseen parts of the image, not just in the rest of the city, but rather the wider world. It is perhaps then, rather appropriate, that this image shows a hotel. 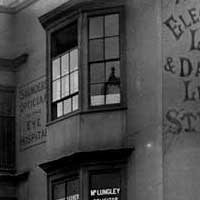 The image above, taken from a photograph of 1909 (amazing how we can just skip a couple of years) is particularly interesting, in that as well as being open, we can also see clear reflections within the window’s glass. This window serves again to take us beyond the boundaries of the image, into its hidden interiors, from where we might look upon that view reflected in the window. The same can be said to some degree about the image below, also from a photograph of 1909. 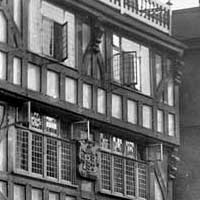 As an aside, it’s interesting how these two images, because they were taken in the same year, constitute in our mind’s eye a single moment; the year (in this case 1909) becomes just that – a moment in time. But what period of time separates the photographs from which these details are taken? Is it minutes, hours, days, weeks or several months? What happened between the taking of one picture and the other?

In the detail below (from a photograph of 1907)  my eyes are drawn to the the bicycle; not the make or the style, but the way it seems to reveal the presence of time, or rather an inconsequential moment in time. For me, it’s in these everday, unremarkable moments that the past is revealed – where history really comes alive.

Of course the man in the foreground looking at the camera, and those people walking up the High Street are subjects of a particular moment (cameras are, Barthes beautifully put it, ‘clocks for seeing’), but there’s something about the bicycle which expresses it better. Below is another a detail from a photograph of 1911. Taken again in the High Street, a few metres back from the one above, Carfax Tower in visible the distance. 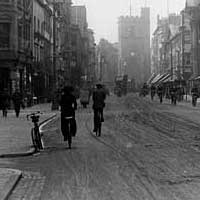 In the image below, something in the window of a shop on the High Street in 1909 has caught they eye of the man looking in as well as the two men walking towards him. The man with his hands in his pockets also describes a specific moment in time; the way he’s standing seems to suggest that he’s just that second stopped; something very different to being ‘stopped’ – as in the case of the two men walking – by the shutter of the camera. But again it’s the bicycle parked at the side of the road which, for me, best describes the moment; or more accurately, its continuity – its place in a passage of time. Even though the two men walking have clearly come from somewhere and will no doubt go somewher else, the bicycle is still much the better way of representing a moment within the passage of consectuive moments, both before and after. 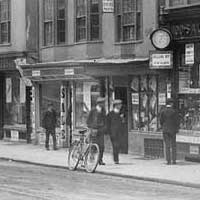 But why is this the case?

One might assume that in a photograph there’s no better means of indicating someone’s presence than someone’s image. The detail above shows such a person on the right. But somehow, the bike and the absence of its rider are more indicative of presence than the man we can actually see, just as it is – as I’ve described above – a better indicator of a single moment in a wider sequence of moments.

“I observe with horror an anterior future of which death is the stake… I shudder… over a catastrophe which has already occurred. Whether or not the subject is already dead, every photograph is this catastrophe.”

Forgetting the bicycle for a moment and looking instead at the man in the photograph, one knows that he is dead. His frozen pose alludes to this anterior future of which Barthes speaks. He also writes:

“In the photograph, Time’s immobilisation assumes only an excessive, monstrous mode: Time is engorged…”

The idea of time engorged conjures up apocalyptic images of disaster; Time not able to proceed but growing nonetheless, swelling within the frame of the picture, the world shaking as it struggles to chew and to swallow. The man in the picture above must and will fall victim to this catastrophe (he must and will die), but the man who’s left his bicycle (and as such the photograph) will instead be sure to survive.

I’d assumed it was the act of leaving the bicycle which gave the bicycle its status in the photograph; the fact that whoever left it would be sure to return and pick it up in a matter of seconds or at most minutes; that it was the idea of these few moments which countered the blurring of time I described above (where entire years can implode to fit the space a second – which itself alludes to the idea of engorged time). But in fact, I believe it’s the rider’s escape from the photograph which instills in them – the bicycles – their appeal to the viewer.We know the rider must be somewhere and it’s as if he’s still there; as if the moment from when he left his bike (for example in 1909), to picking it up again is still ongoing. 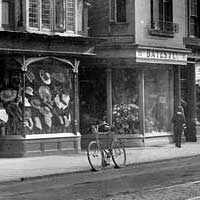 The detail above is taken from a photograph of Cornmarket in 1889. Looking at the entire image, one can see that all the buildings shown have since been demolished, and as sad as this is when one sees what stands there now, one doesn’t find it hard to imagine. Buildings are demolished all the time – it’s a fact of life. But when looking at the detail above, with its open window, it seems less conceivable that it’s since been destroyed, that it no longer exists.

Such a thought doesn’t occur however when I look at images of people. 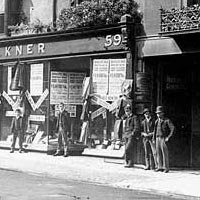 The image above is a detail from the same photograph. Like the building they stand against, all these men are gone. But this, unlike with the detail of the window, does not strike me as inconceivable in any way; quite the opposite. Perhaps it’s the open window which makes the building’s demise (or non existence) seem so unlikely. The open window is indicative of life, of the everyday aspect of life. Who would open a window in a building set to be demolished? But then, who would dress and pose for death? 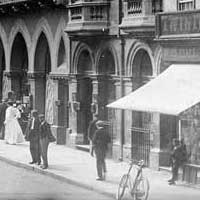 Above, Cornmarket 1907. Another rider has escaped impending disaster. 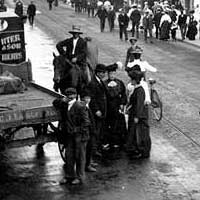 Also Cornmarker 1907. A group of people talk at the southern end, nearest to Carfax. Their clothes (particularly those of the women) position them unequivocally in the time in which they lived.

A number of questions come to mind as I look at them and the scene around them. What are they talking about? What were the hot topics of the day? Where is the woman pushing her bike? (Wherever it is, it’s too late to escape the imminent catastrophe). In this image however, that which captures my interest above all is the rain on the pavement.

Just as shadows give life to a photograph (without the sun beyond the frame of the photograph there can be no shadows within it) so puddles and reflections on wet pavements point to a time before the photograph was taken and, – like shadows with the sun – to the clouds above and beyond the gaze of the lens. Barthes declares that “the photograph is without a future” and while this might be the case, there’s is no doubt they have a past.

Sometimes, photographs (without shadows, puddles, windows open and closed) can look flat and lifeless, as if they’re merely constructions (tableau vivant) designed in their entirety, as counterfeits for the reality they purport to be. They have no future, but, more importantly perhaps, no past. The rain in the photograph above however counters this; it gives the photograph its validity, it is a recognisable sign that something came before. 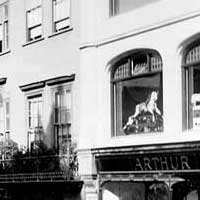 The detail above is taken from the same picture (Cornmarket 1907), and, rather sentimentally perhaps, I was drawn to the rocking horse in the window. One can’t help but wonder what happened to this somewhat peripheral object (peripheral in terms of the overall photograph). I can well imagine it languishing in some dusty attic, forgotten, even broken… although, of course it might be in very rude health, respected as an old family heirloom. And herein lies its point of interest. Whatever its current state – if indeed it still exists – here, in the picture, it’s yet to occupy the mind of the person to whom it belonged. It’s yet to form the memories which that person would have carried with them throughout their life, memories which they might have passed down and which might, to this day be talked about. Perhaps this rocking horse no longer exists as a physical object, but maybe somewhere, it continues to move in words, written or spoken.