This image was part of a collection I bought a few years ago. I had no idea what I was buying at the time and was intrigued by the image reproduced below. 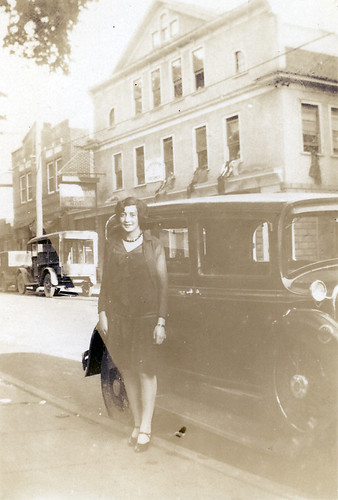 In the photograph, a young woman poses beside a car. The awkwardness of her pose and the uncertainty in her face suggests that she is attending a special occasion of some kind. In the second image below, she is joined moments later (or perhaps it was before) by a young man (her partner?) who also looks a little uncertain, not necessarily because of what he’s about to do, but rather because of what he’s doing at that exact moment, i.e. having his photo taken. Perhaps they are young lovers about to get married? Of course we’ll never know. 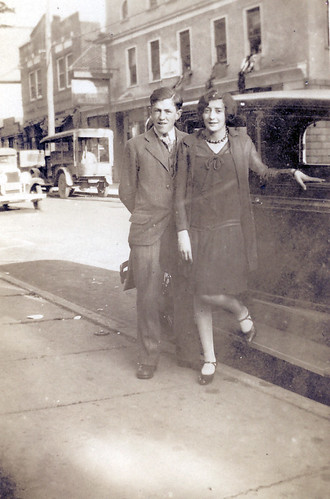 What intrigues me about these pictures are the details. Looking again at the second photo – which might of course, in the course of time, have come before the one above it (“…if things are perceived as discrete parts or elements they can be rearranged…” as Bill Viola writes) – a car has appeared on the left, moving into shot just as the shutter is released. Even though the young man has also ‘appeared,’ it’s nevertheless the car which gives us the sense of time passing; it is a vehicle for what Sontag describes in her book, ‘On Photography’ as “time’s relentless melt.”

Who was in the car as it drove past? Where was it going? Where had it come from?

History often comes to us ‘top ‘n’ tailed’, where all that went before the period in question, and all that came thereafter is removed, leaving us with an event which reads like a novel; conveniently packaged with a beginning, a middle and an end. To some extent, regarding this, the first image serves as an illustration, whereas with the second, the car tells us that something came before the ‘beginning’, and that something will follow ‘the end’. As a painter, Degas was inspired by photography, and used this device to give his works a greater sense of movement. It’s not so much a means of accentuating movement with regards to that which is shown, but moving the viewer into the world that’s hidden beyond its edges.

Just as in the first photograph I looked at, my viewpoint shifts as I become aware of the image’s other protagonists. From in front of the couple, and in the guise of the person who took the photo, I glimpse the couple as if I can see them out the window of the car. It doesn’t last for long, but it shows how an image can be opened up by such small details.

Windows in photographs have always interested me for much the same reason. Within the context of an image, like those above, they provide a means of escape, or again, as in the case of the first photograph I discussed, a means of concealment. They act as eyes, reflecting – literally – the world around them; the world beyond the limits of the picture’s edge. Spatially and temporally, there’s always more to a photograph that that contained within its borders; and for me, a photograph’s appeal, often resides in how it allows access to these spaces.

In the detail below, we can see in some of the windows, the sky and the trees reflected from beyond the frame of the camera; another way in which a camera can capture that beyond its reach.

Windows are also evidence (or perhaps reminders) of ordinary people living their everyday lives without a thought for the subject or subjects below – in this case the couple on the pavement. They conceal those who are perfectly oblivious to the chemical annexation of whatever inconsequential moment in time is being captured. And as a result, this invisible population can often breathe life into a photograph well beyond the stage upon which the action is taking place.

“On account of her necklace, the black woman in her Sunday best has had, for me, a whole life external to her portrait.”

What Barthes perhaps means, is that the necklace has a provenance, and therefore seems to speak more about the woman’s life than anything else in the photograph. It is a cherished object, worn perhaps for the occasion of the picture (just as the necklace has perhaps been worn by the young lady in the images above). For me, this is, in a way, analogous to the windows in the first picture and the car in the second, for they are small details compared with the picture’s subjects, but details which, nonetheless, build for us a bigger picture of the world the subjects inhabit.

The closed windows in the building then, reflect the world beyond the edges of the photograph, they provide evidence of a world beyond the stage. Furthermore, they are windows onto the stage, through which those sitting, standing or passing behind might, just like the driver in the car, catch a glimpse of the actors.
The open windows however provide us with something a little different. Open a window and the outside world pours in; sounds, smells, the noise of the traffic and passing conversations. In other words – life. They serve to animate the scene, again just like the car, and through them we can let our imaginations wander, to discover for themselves, more of this world long since vanished.