I want to look at another photograph from the book ‘Prague Through the Lens of the Secret Police.’ 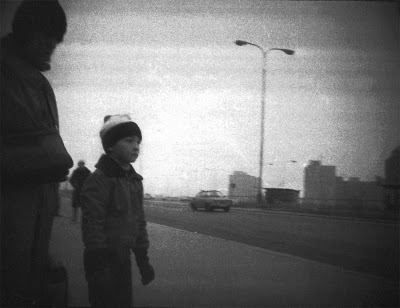 Leaving aside how the photograph came to be taken, this is, I think, a stunningly beautiful shot. Its tonal quality, the grain of the picture’s surface, the soft focus and the gradation of light from the centre of the photograph to shadow at its edges, all make for an image which revolves around the child and which, we might say, celebrates the innocence of childhood. There’s a sense of wonder in the boy’s face, his eyes staring at something we cannot see in the distance. And yet there’s also a sense of foreboding (light becomes shadow); in the figure on the pavement behind them, in the solitary car on the road, the grey concrete blocks and the double lights of the lampost which mirror the shape of the child’s eyes as if they too are watching, not what lies ahead, but what is down below. There is perhaps no point in looking ahead to the future, but the boy does it anyway.

Besides the boy and the street lamps, only the car has eyes. The woman beside him is wearing dark glasses, the figure behind is little more than a blur, and even the tower blocks seem blind without their windows. No-one inside is looking out. People are there to be looked at, nothing else. And yet the boy stares ahead, oblivious. His body is tense – perhaps from the cold – as if he’s about to run towards the future.

Of course there is one person in this image I haven’t mentioned, and that’s the person who took the picture; a  member of the Czech secret police following the woman and her child. However, unlike with the previous photograph, I do not feel I’m there within the frame. I’m very much an outsider looking in. But given how the photograph was taken (perhaps from the surveillance officer’s waist) my viewpoint is subsequently low, as if I too am a child, accentuating the sense that this is a photograph about the boy, or rather childhood: innoncence in contrast to its loss under such a regime. But these of course are interpretations made some 27 years in the future. The fact is, that this was a photograph taken for the purposes of surveillance, for control. In reality, it’s far from being the beautiful photograph I said it was earlier.

Yet it is still that: beautiful.

Over time its purpose,  as an object of surveillance, has slipped away, leaving it open to aesthetic appreciation. But there is an awkwardness here, something uncomfortable in the fact, and this is an area to whcih I’ll be returning.