Over the course of the past week, I’ve been scanning in what amounts to almost my entire collection of family photographs. I started, initially, a while ago with just a few that I particularly liked, but after a time, began to think of scanning all those contained in various old albums, a plastic bag and a dilapidated cardboard box. The possibility that one day they would be lost was as good a reason as any; that and the fact it would be easier to view them and to organise them (through the joys of Flickr) were my principal motives.

So, staying up late into the night, I have, over the last few days become somewhat obsessive, and scanned in a few hundred photographs, covering a period of time between c.1946 to c.1997. And, although at first this was a purely practical exericse, it soon became much more than this. It was, and still is, a journey of discovery, for in these small, ‘chemical annexations’, I can see again faces long since lost to the past; revisit once familiar places, and perhaps most poignantly of all, find long lost objects as if I were rummaging through the contents of an attic.

I will write about this experience at length, but will conclude with a summary of what I’ve been thinking when looking at these images. Firstly, I’ve come to realise how drawn I am to ‘bad’ photographs such as the one below: 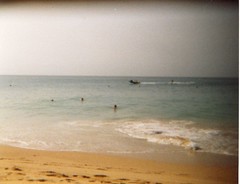 There is something about this photograph (and many others like it) which I find particulary haunting; something about its amateurishness, which makes it seem somehow more genuine. It has the freshness of a sketch as opposed to a finished painting and contains references to an experience which is both direct and profound. Perhaps it is the footprints in the sand, long since washed away which I find so affecting? Or maybe the unknown swimmers and the water-skiier: distant then, and as just as unknown to me now. What course did they take through life after this picture was taken? Did they yet survive the sea, in which, in time, we all will come to be drowned?
As Barthes said:

“I observe with horror an anterior future of which death is the stake… Whether or not the subject is already dead, every photograph is this catastrophe.”

The photograph above seems to illustrate this perfectly, as do many ‘bad photographs’ I have found. Perhaps it’s because they contain this reference to the less than falable human holding the camera (a difference between chemical and digital).

Following on from this, I’ve become very interested in the peripheral parts of photographs, particularly in relation to images taken near the sea (distant swimmers, ships and so on). I have already written about windows in relation to other photographs, but having recently scanned and observed so many images, I’ve come to realise that it’s these areas which are the most ‘genuine’, perhaps because those inhabiting the distance are freed from the artifice of a pose, or because at the moment the picture was taken (just as they were for the rest of their lives) they were oblivious to the photograph’s principal subject and the one taking the picture.

This obliviousness is something I find quite compelling, particularly in relation to my work on the Holocaust, whose victims were by and large anonymous, both in life and now in death. Although I wasn’t living at the time, many members of my family were; they were the ones on the periphery, the specks in the distance, oblivious to what was going on behind them. 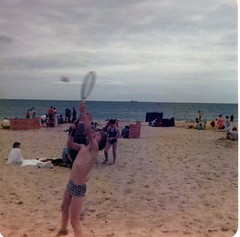 This is a photograph taken in c.1976. It shows my brother in the foreground playing tennis, a lovely image of a fondly remembered family holiday. But what interests me, in relation to my thinking, is the distance.

Looking out to sea we can see a ship, a tanker, sailing under the direction of more (and no doubt large numbers of) human beings, hidden away and quite unknowable. Yet for a time we shared the same stretch of the planet. Those onboard would have had no idea as to our existence, they would have seen at best a mass of coloured dots on the horizon. Yet this degree of separation does not make us any less human, any less feeling. Distance does not negate our hopes and our ambitions. Those few unknowable dots, in the eyes of the ship’s crew, were my family, and have in the years that followed, seen more members come and go. And whether the distance between us is measured in years or miles, we must never forget, that what we see as specs on the horizon, or dots that make the picture on the TV screen, are, in the end, the same people as us.