“…it is this element which rises from the scene, shoots out of it like an arrow, and pierces me. A Latin word exists to designate this wound, this prick, this mark made by a pointed instrument… punctum; for punctum is also: sting, speck, cut, little hole – and also a cast of the dice. A photograph’s punctum is that accident which pricks me (but also bruises me, is poignant to me).”

Looking again at the photo of Jonah Rogers, I became aware of something which, as Barthes might have put it, ‘pricked me’.

This is the photo… 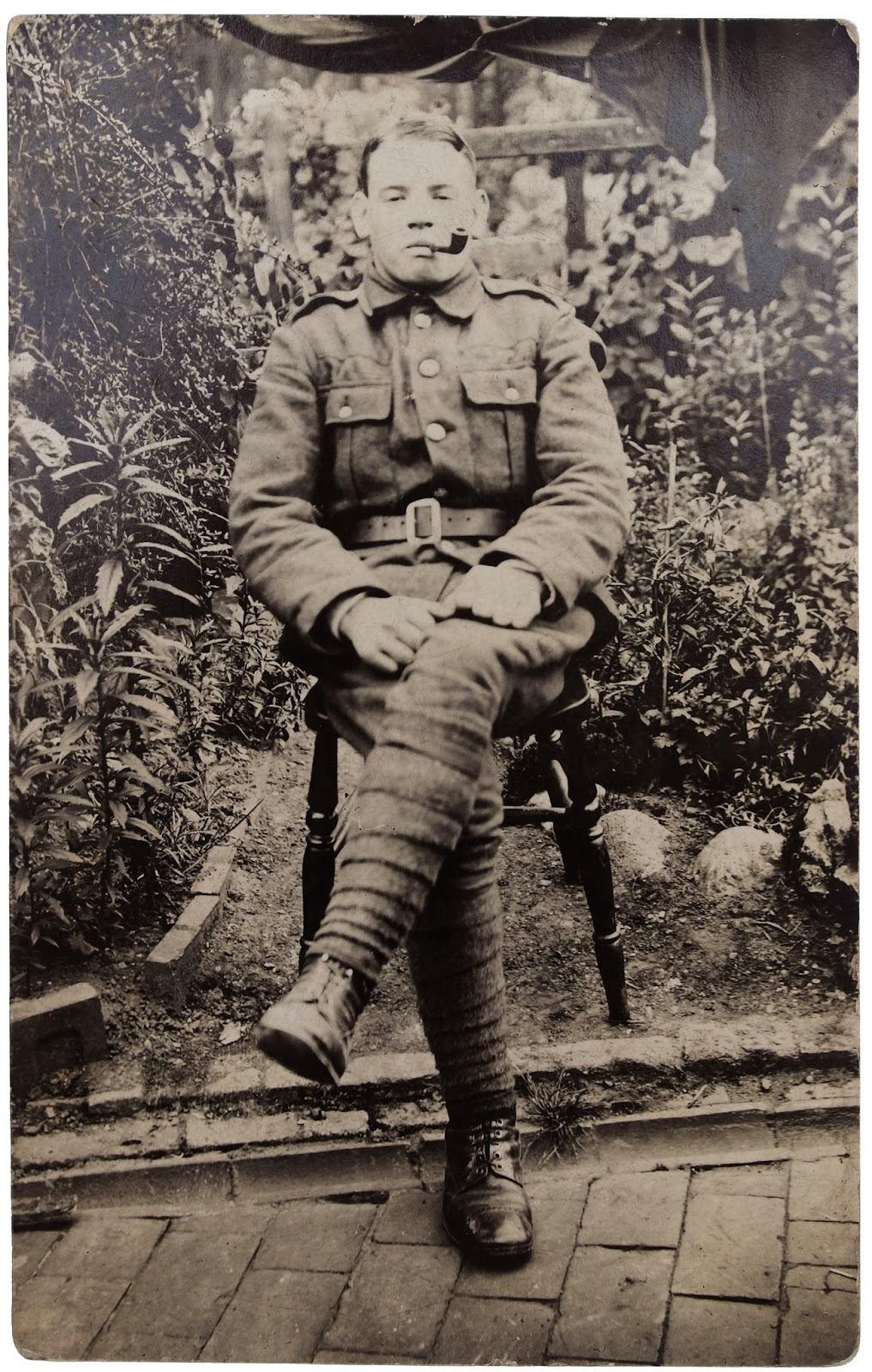 …and here is the ‘punctum‘. 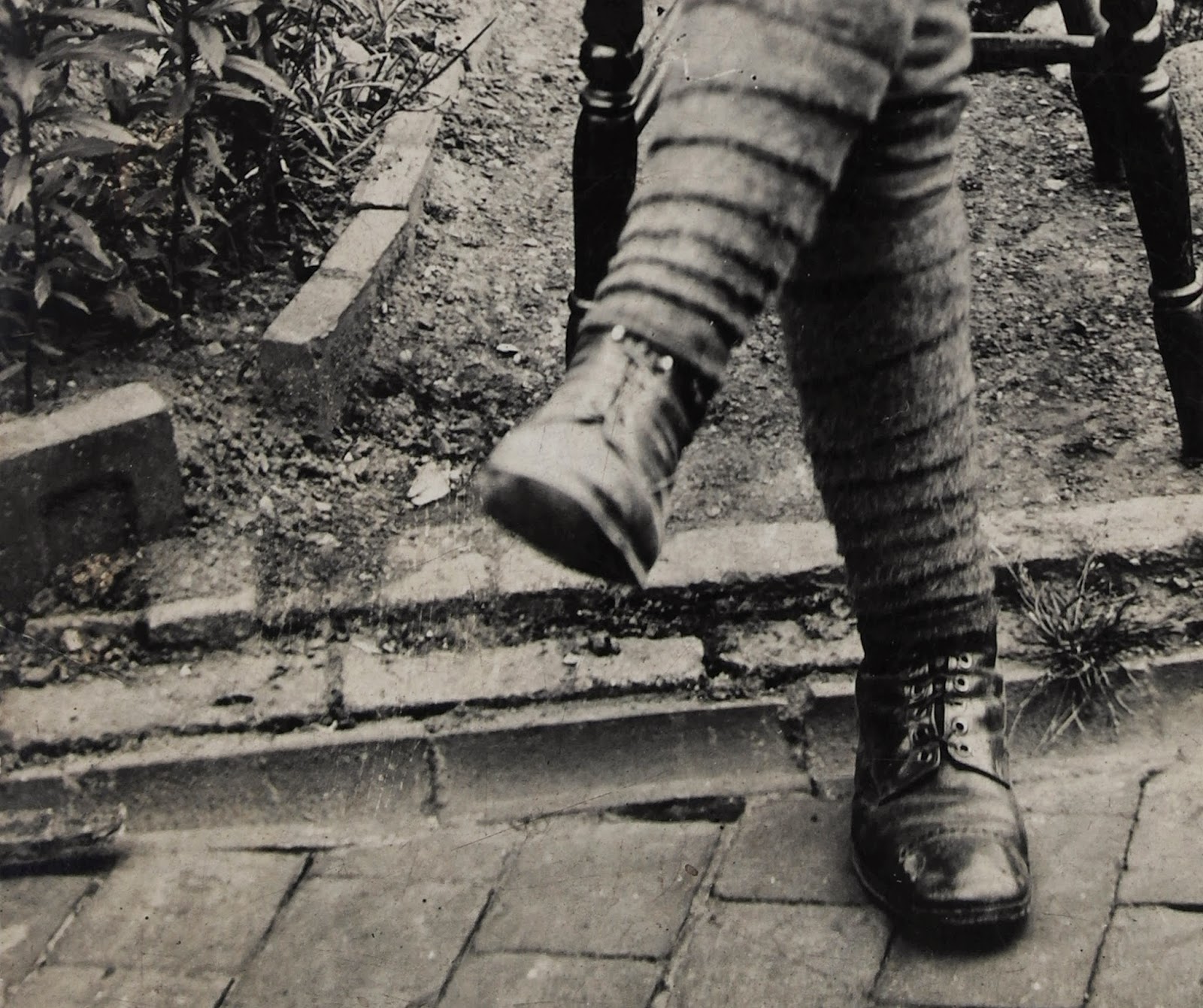 In actual fact there are two things about this detail which interest me.

The fact it’s blurred implies that it was moving when the picture was taken. Otherwise Jonah appears stock still, unnaturally rigid, his hands curled into fists on his lap. One detects through this foot a sense of anxiety – not so much because of what he’d have to face on the battlefield, but rather because he was having his picture taken; he doesn’t seem comfortable in front of the camera – his foot is constantly moving. The pipe in his mouth also seems a little incongruous – especially when one considers those clenched fists; his hands look as if they’ve never held a pipe before. It’s almost as if someone has placed the pipe in his mouth.

The second thing is the ‘missing’ brick in the flower bed.

That there must have been a brick implies a passage of time between when the brick was laid and when it became dislodged – kicked perhaps out of place. That brick hasn’t been replaced, the flower bed and path have tumbled into one another and time has fallen from the photograph like the mud and mulching leaves. Or perhaps there was never a brick at all and the gap is some sort of conduit for water – the gutter running across the photograph implies this might be the case. This would still suggest a sense of time bound up in the thinking of whosoever laid the bricks in the garden, and indeed the flow of water itself. Whatever the gap is – drain or accident – both possibilities point to a time before the picture was taken; they give the photograph – to use an apt metaphor – temporal roots.

Jonah was killed in 1915 in the second battle of Ypres and I can’t help drawing a parallel between the soil of the garden and the infamous mud of the trenches such as those pictured below in which some of the 2nd Monmouthsires (Jonah’s battalion) can be seen. 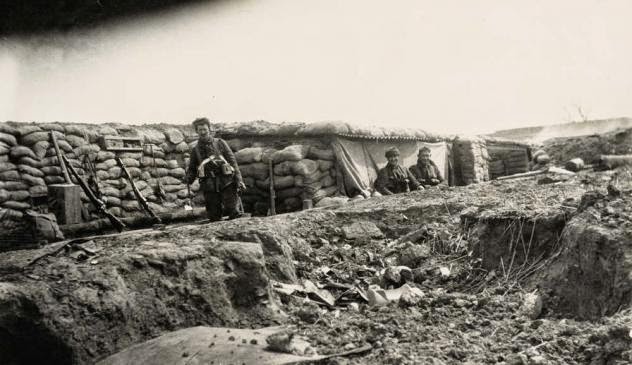 This then brings me to the Paul Fussell quote I often return to:

I have for a time been thinking of the phrase ‘moments of pastoral’ and have come to regard it on a domestic level, i.e. moments of pastoral as experienced in a garden. I have always considered it vital, when establishing an empathetic link with those who died in the war, to consider their lives before the war. As I’ve written in a previous blog:

Neil Hanson, writing in ‘The Unknown Soldier’ talks of how, on the eve of the Battle of the Somme, the smell in the air was that of an English summer – of fresh cut grass; the smell – one could say – of memories; of childhood.

The garden then is a link to a time before the war and again this is reflected in some of the postcard portraits I have in my collection, where soldiers were photographed – prior to leaving – in their gardens. 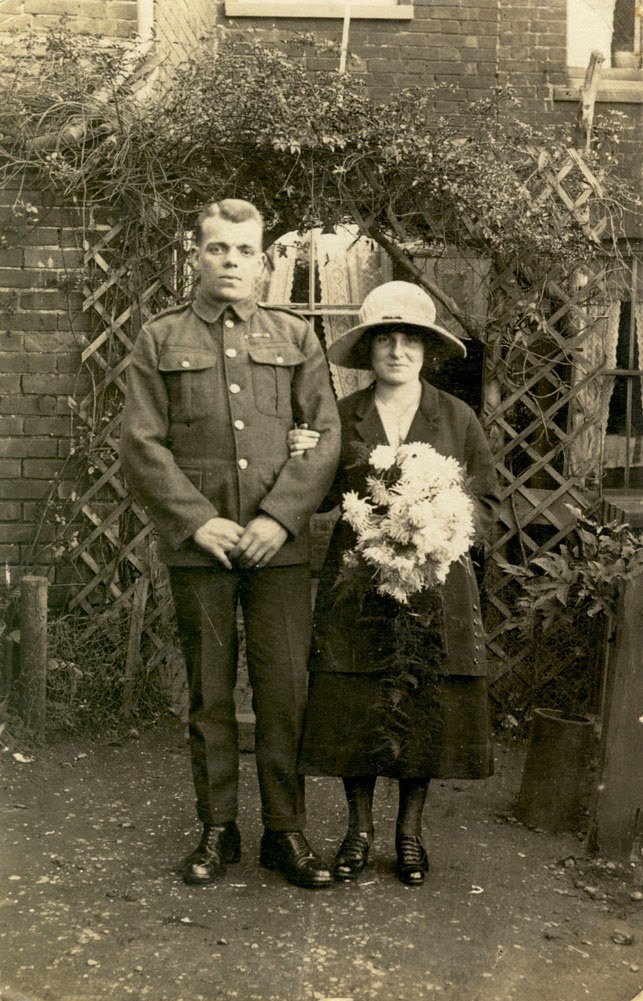 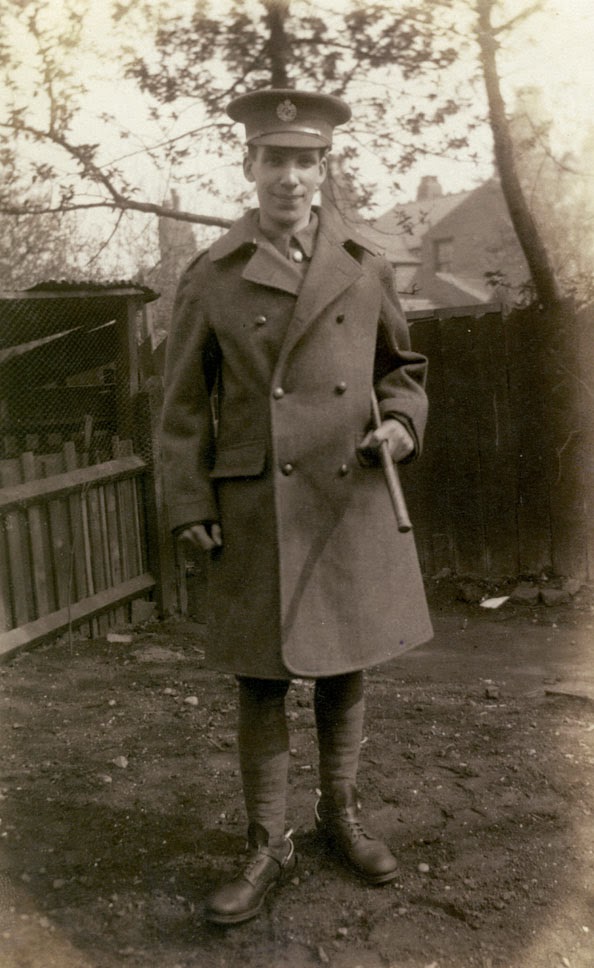 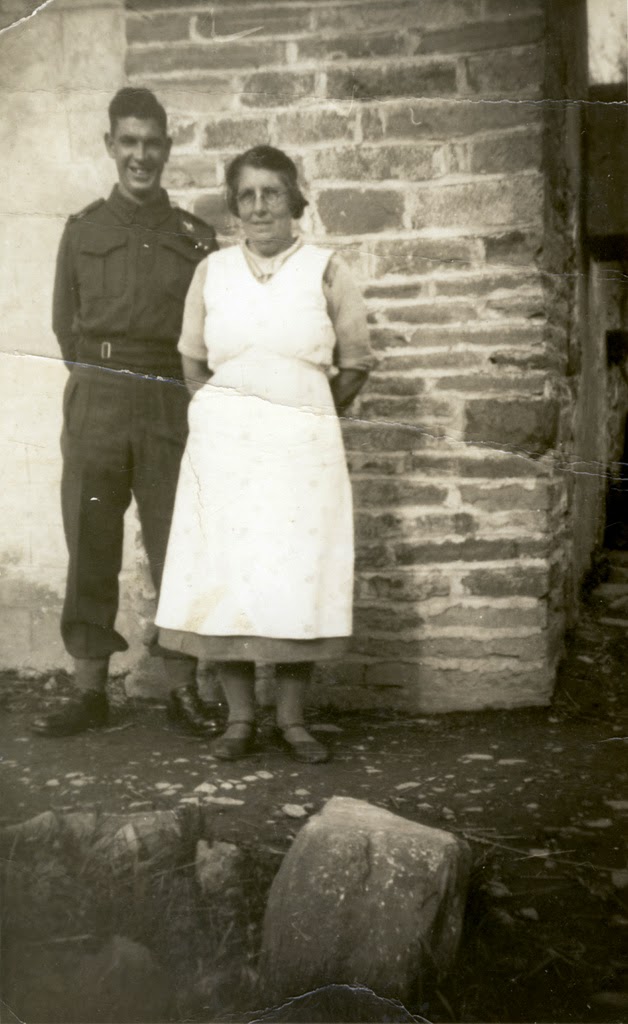 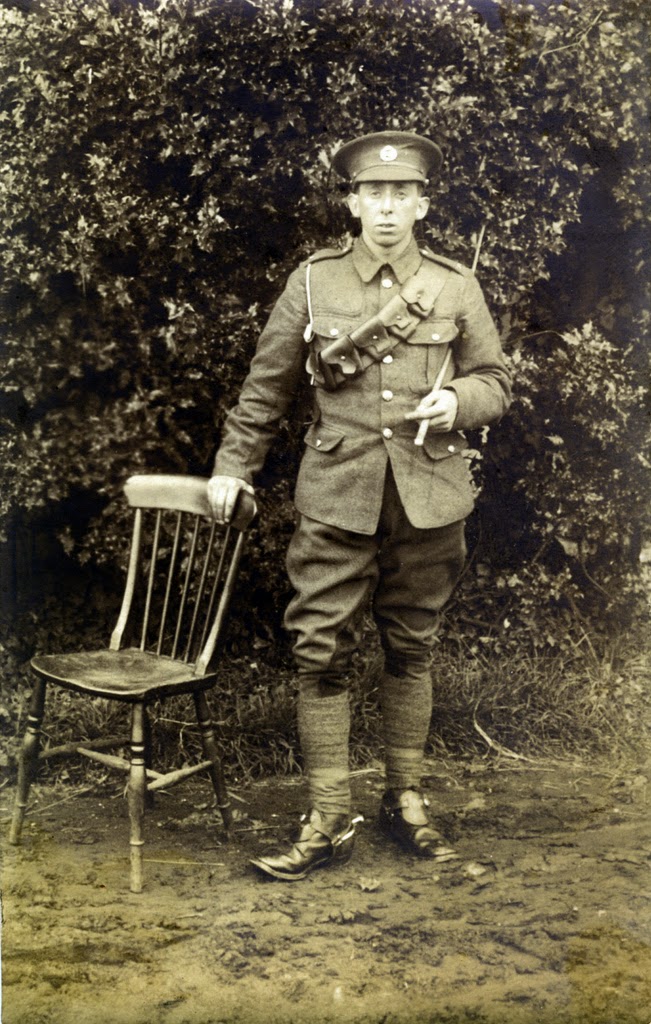 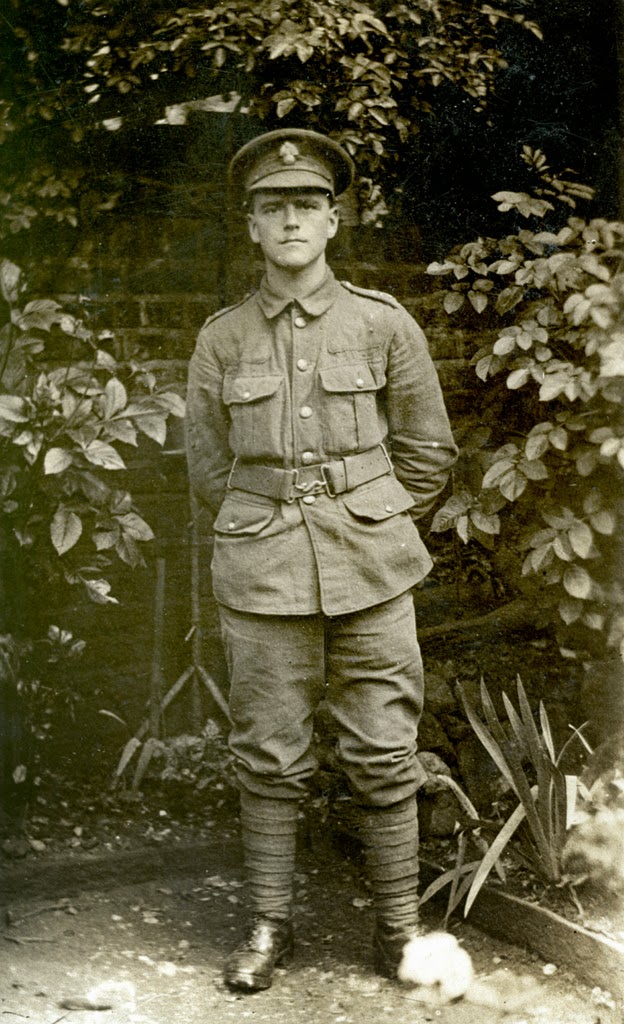 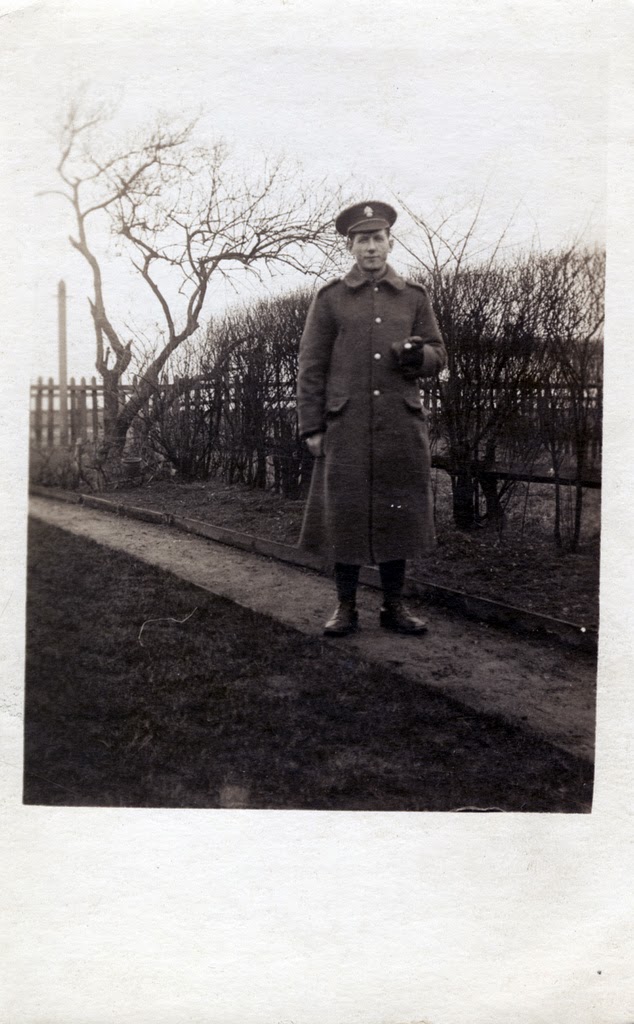 I have always found these images especially poignant and have written about them before but there is something here I want to explore further; that is the empathetic link between ourselves and soldiers who fought and died in the war and the idea of the garden as a shared space of memory and experience, a conduit through which an empathetic link might be established.